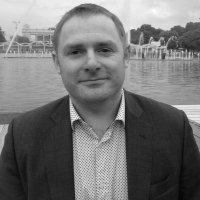 In terms of education, my background is originally as an historian with a side-line in languages, but I did my postgraduate work at King’s College, London in the War Studies department which was much more multidisciplinary – including political science and strategic studies, and then with a focus on studying contemporary Russia.  Since then, my work has really been a mix of academic research and public policy thinking with stints at NATO and the University of Oxford, for instance, working on various themes of Russian foreign policy and domestic politics. The Wilson Center’s Kennan Institute allowed me to continue that matching of policy relevant detailed research from a US angle: it’s the ideal place for thinking about Russia’s role in in international affairs, and how to think strategically about the questions Russia poses.

I’m working on a book on the Russian way in war. The project was initially conceived in 2016, and I originally applied for the Kennan Fellowship in 2019 – and, had it not been for Covid, would have taken up the position in March 2020. The book examines how the Russian leadership understands War, and how the military is used by Moscow as a tool of policy. To do so, the book traces the development of Russian military science and history from World War I through to the current era, matching the evolution of military theory with practical experience in war through the twentieth century and into the twenty first. So, the project explores continuity and change in the Russian way in war, and the extent to which Russia’s way in war is distinct from Western ways in war.

The project emerged from a book I wrote trying to answer the question of whether Moscow had a grand strategy and if so, what it might mean. This took me into researching how the Russian leadership saw the world and spent the 2010s preparing for intensifying geoeconomic competition, even war. This included considerable shifts in the political and defence landscape in Russia, and reform, re-equipment and rehearsal of the armed forces. In many ways, there appeared to be a strong connection between Russian grand strategy and preparation for competition, even war, and the next step was to ask what war means to Moscow.

When Russia annexed Crimea, though, a view emerged across the Euro-Atlantic community that Russia had developed a new way in war, one that was reflected in measures short of war that didn’t involve actual combat: instead, Moscow was believed to emphasise ambiguity and asymmetry, political interference, propaganda and disinformation and cyber-attacks in a sort of “hybrid war”. But while some of these methods were indeed obvious, there was also lots of evidence that the Russian leadership also used the military tool – for instance in the decisive battle of Debaltseve in 2015, which led to the Minsk II treaty, but also in Syria, where it emphasised “massive combat power”!

Digging into all this led me into a wide range of other questions – about what Russian military strategy means, what traditions there are in Russian warfighting, what shifts have taken place in military fashion and taboos, and how history echoes through contemporary Russian military thought. I’ve been looking into how the Russian military uses history – not only in symbols, but also in terms of what “lessons” history might teach, and what can be learnt from it about the changing character of war. It also took me back to my War Studies education, as I returned to reading some of the classics of strategic thought, and dusting off my books about ways of war which in turn brought fresh angles to my Russia studies.

Much of my work is about trying to match western concepts of strategy and military strategy to Russian (language) evidence to give some structured analysis to our main questions about Russia. In so doing, I try to mitigate mirror imaging and confirmation bias and to illuminate just how different the world looks to the Russian leadership, and just how separate our political world views often are. So often the Russian leadership draws not just different conclusions from the same evidence, but also different conclusions from different evidence.

Sadly, the events of the last few months show very clearly why this research matters to a wider audience, policy makers, academia and the wider public alike. There is a war underway, and people are asking whether Russia will attack NATO, whether Moscow will resort to weapons of mass destruction and so on. So, understanding the Russian way in war has become during my fellowship an essential question for a wider audience.

Moreover, the unfolding tragedy in Ukraine is not some unexpected, unpredictable development but the result of both a protracted series of policy disputes on the one hand, and Moscow’s attempt to generate strategy and military strategy on the other. The “Great Power Competition” that we have spoken about in rather vague terms since 2017 is now made real, and seems likely to last for the foreseeable future.

There are several challenging aspects to this research now, but perhaps the most important ones over the last couple of years have been practical. I had gathered most of my main research material but over the last couple of years, the pandemic created one set of challenges – travel to Russia to access libraries and archives and to go to Russian conferences. Even libraries in the UK were shut. And now the situation is further complicated by the inaccessibility of numerous Russian websites, official and media. And in some senses, the invasion has also served to shift the discussion about Russia and war, and there are challenges in attempting to peer through the fog of war underway at the moment.

At this difficult time, where we are now, I hope my impact will be to inform the policy debate and also the wider discussion about Russia. I hope to contribute to the discussion about Russian strategy and intent in the war, as well as capabilities and limits. Equally, we are at an historic moment – we’re not drifting back into a return to the past challenges, not back to the Cold War, but going forward into a period of extended competition which involves the very serious risk of going to war. So, I hope that my work will help both to frame the challenge, to understand how Russia does, and as importantly does not work, but also help to think about how to envisage the next five to ten years.