Satire Under a Bright Red Star 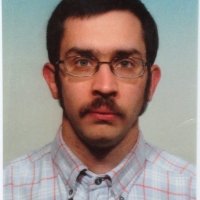 Siavush Randjbar-Daemi looks into the unique story of a communist, satirical newspaper in 1950s Iran.

The period leading to the August 19, 1953, coup against Mohammad Mossadegh marked a unique instance in the history of the modern Iranian press. The weakness of the royal court, the limited state censorship imposed by Mossadegh’s National Front government, and the relative strength of opposition parties were all factors conducive to a lively and unique press scene in Iran, one on which the global Cold War cast a strong influence.

The left-wing, Moscow-oriented Tudeh Party—despite being formally banned following an attempt on the Shah’s life in 1949—maintained a constant presence in public life through several front organizations, newspapers and periodicals. Amongst the latter, one of the more daring and popular was Chelengar, a satirical publication shaped by its founder and driving force, Mohammad Ali Afrashteh.

Afrashteh was a self-made poet and satirist, and a native of Gilan Province in the North-West of Iran on the Caspian Sea—the local dialect of which, Gilaki, provided the publication’s title, meaning “Ironsmith” or “Locksmith.” He was first introduced to Tudeh circles in the 1940s through a brief exposé of his verse written by the prominent and long-serving Party member Beh Azin in the Party’s intellectual journal Nameh-ye Mardom (“The Letter of the People”).

A disadvantaged childhood and a series of menial jobs as a young adult imbued in Afrashteh (a self-described “Tudehi out of the womb”) a deep understanding of the struggles of the working class in 20th century Iran. After a stint at the major satirical publication, Towfiq, and contributing occasionally to other satirical magazines, he launched Chelengar in the spring of 1950.  Its motto, etched under the logo of each issue, demonstrated his commitment: “Let this pen, this hand break/If they shirk the cause of the poor.”

While not an official party organ, Chelengar assumed almost immediately a clear and occasionally brash tilt in favor of Tudeh stances. According to surviving contributor Nosratollah Nuh, Afrashteh and the other members of the editorial board would get first-hand knowledge of the party line by congregating in known gathering spots, such as the Peace House, one of the few Tudeh-linked venues tolerated by the authorities by virtue of being the headquarters of the Iranian branch of the global Peace Partisans movement. It was through this interaction that the two main strands of Chelengar’s world-view would come together: sympathy for the plight of the lower classes united by an unremitting belief in the allure and mystique of the Soviet Union.

Chelengar relied on simple prose and verse which could be appreciated by a working class readership. Shorn of the occasional vulgarity that could be found in Towfiq and other prominent satirical publications of the time,  Chelengar’s major innovation consisted of its third page, which was entirely devoted (save for when it was blocked by state censors) to contributions in Iran’s many non-Persian languages. The result was a unique medley of voices from Turkmen, Kurdish, Azeri, and Gilani communities. 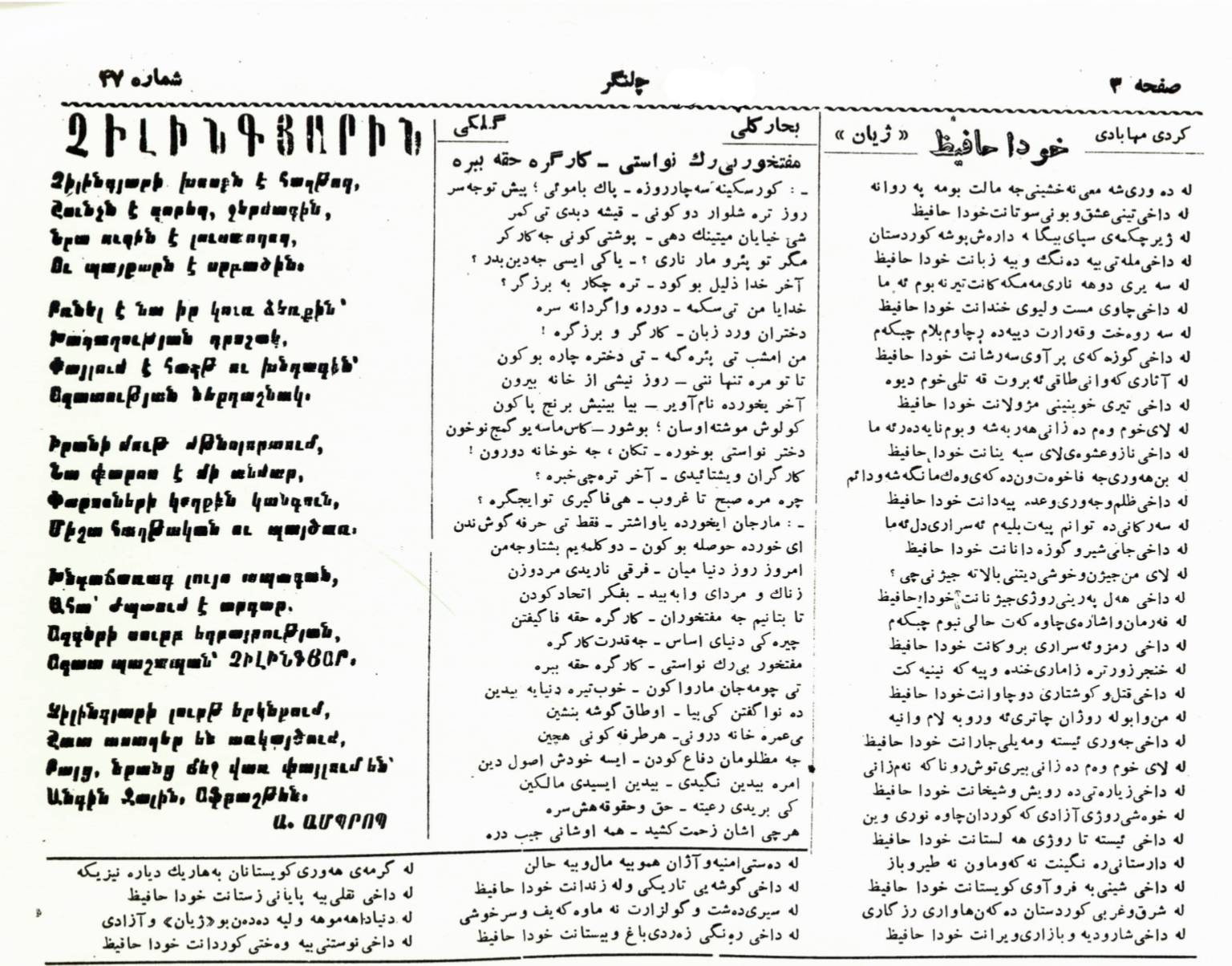 At the same time, Chelengar acknowledged Iranian traditions. It ran special issues during the Mehregan festival, would print respectful poetry during Ashura and would rarely, if ever, lampoon faith, instead focusing its wrath on the clergy.

Above all, however, Chelengar remained a publication strongly influenced by the global Cold War. In the third issue, published on March 21, 1951, President Truman was sarcastically derided as a “bomb-toting pacifist”, in reference to his interventionist attitude toward the Korean War. On the other hand, a long poem published on the anniversary of the Bolshevik Revolution in November 1951 praised Lenin and Stalin as being harbingers of progress and leading the people together in Revolution. 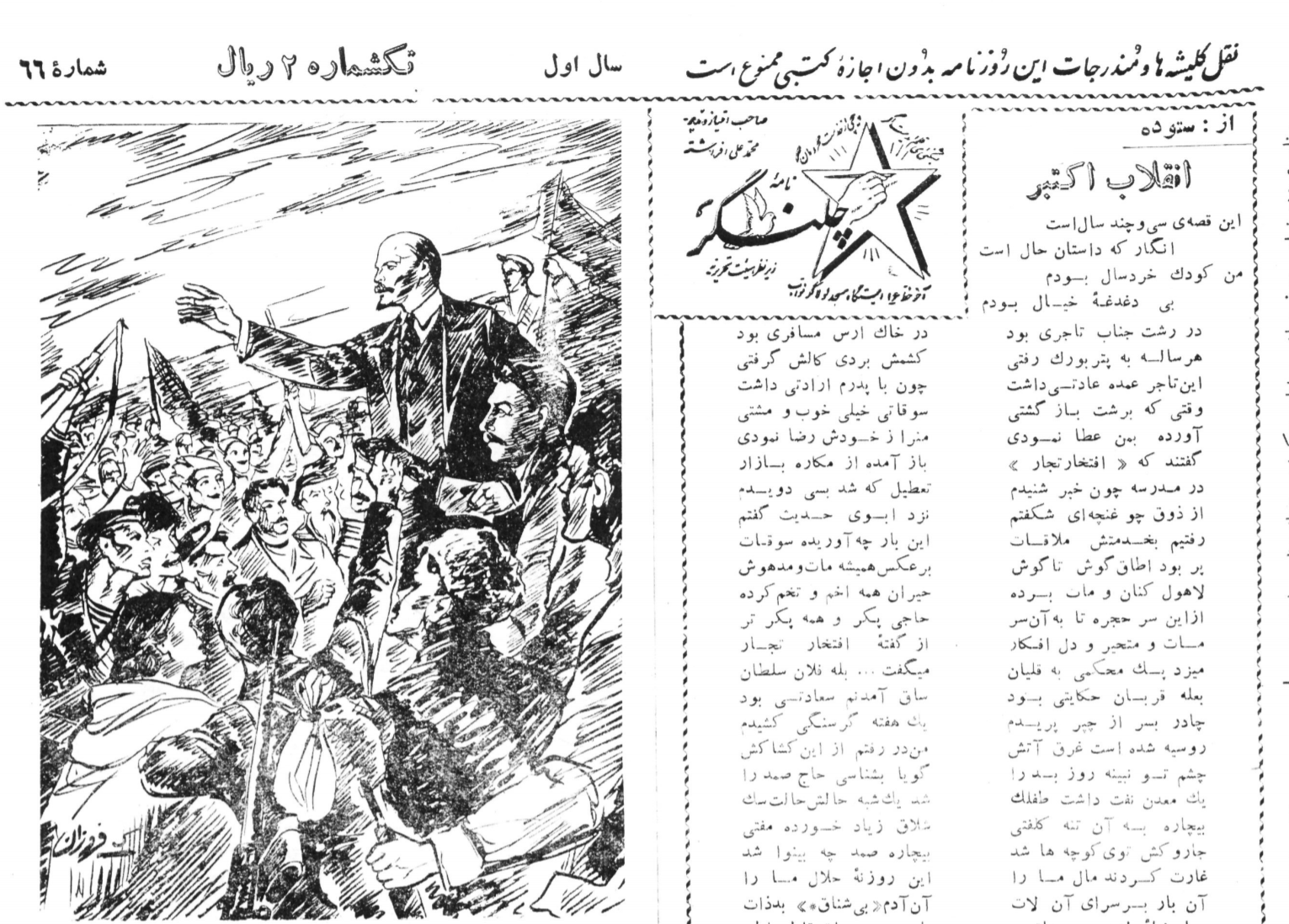 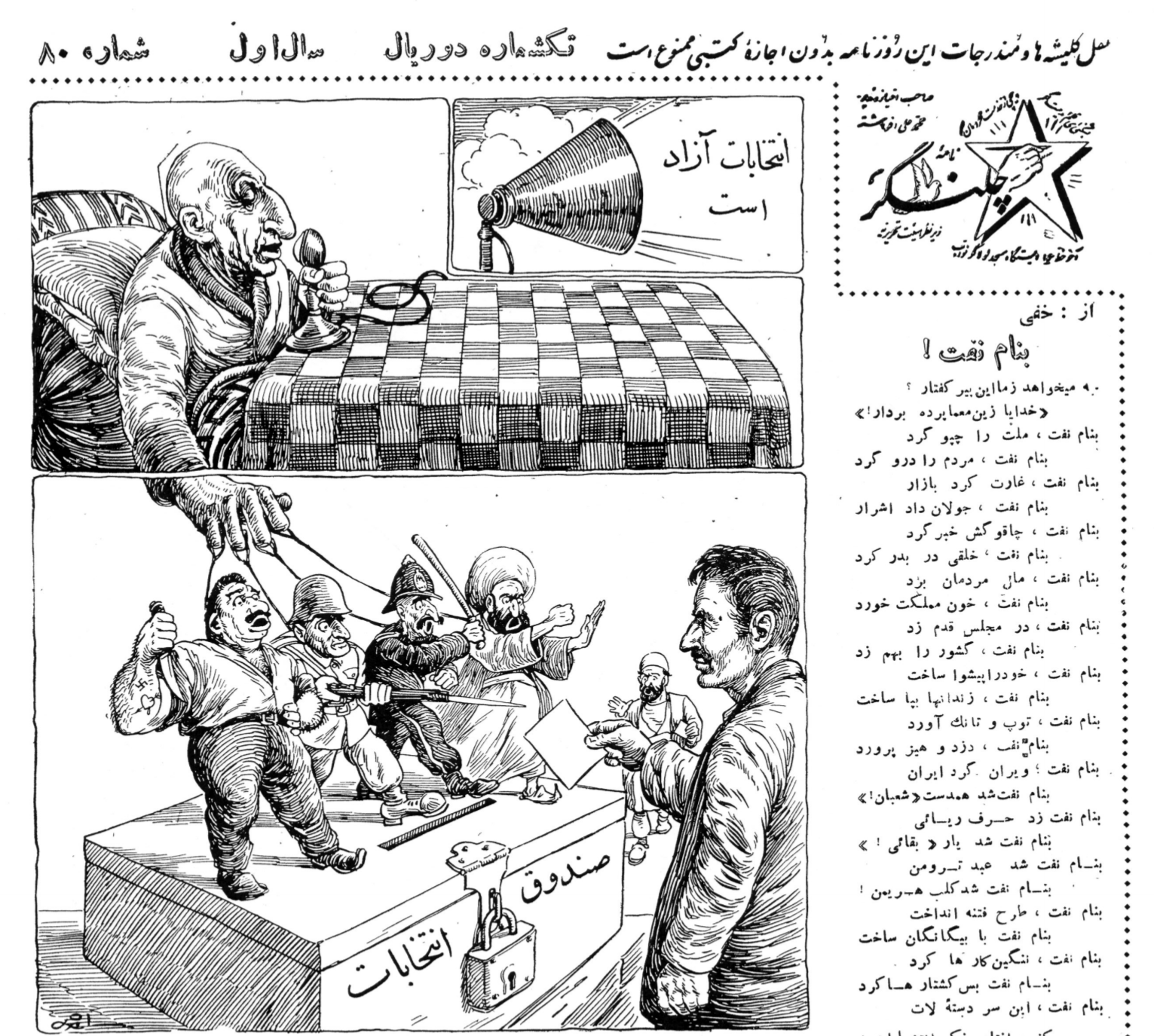 In its first verses on Mossadegh, published five days after the start of his premiership in Spring 1951, the publication decried the nationalization of the oil industry as a ruse designed to consolidate British and American interests, a position it pursued as previous pledges for the granting of a Northern oil concession to the Soviet Union were not met. Mossadegh’s insistence on selling Iranian oil only to Western customers was also the subject of one of Chelengar’s many notorious cartoons, in which he dons the attire and tools of a traditional itinerant tea seller, but refuses to provide oil to a queue of expectant Third World clients, prominently including men from Poland, Czechoslovakia and China. 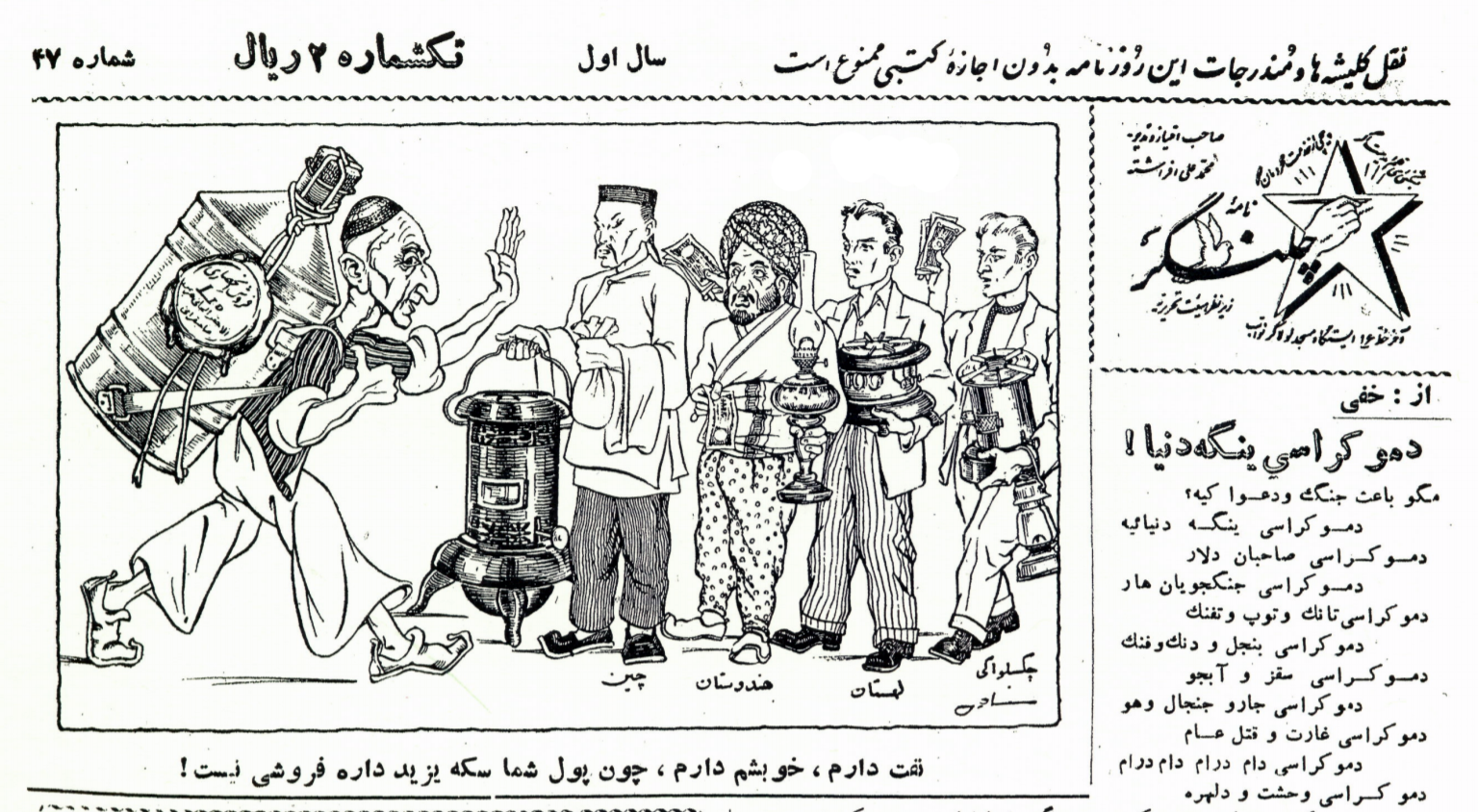 Unlike publications more tightly connected to the Tudeh Central Committee (such as Be Suy Ayandeh and Shahbaz), Chelengar refused to attribute any credit to Mossadegh for the July 1952 Uprising, known in Persian as Qiyam-e 30 Tir. A poem and cartoon celebrating the defeat of the Shah’s plan to install Ahmad Qavam as prime minister listed the mellat, or “people,” as the sole victor, ignoring the main force behind the uprising: popular desire to reinstate Mossadegh. By that time, the vitriol espoused in the previous couple of years had made “rehabilitation” too remote a possibility.

Chelengar instead chose to use the uprising to challenge the Royal Court directly. In place of the royal emblem, which headlined court communiques in the press, Afrashteh and his colleagues put a cracked teapot, and when the Shah offered his condolences for the loss of life on 30 Tir, Chelengar replied with a satirical declaration by the Shi’a arch-nemesis Yazid, in which “crocodile tears” were shed and an apology was sought for the lack of widespread bloodshed. By associating the Shah with the Sunni commander who was responsible for the death of the Imam Hussein at Karbala, Chelengar sought to creatively rely on religious imagery to show its derision of the royal declaration. 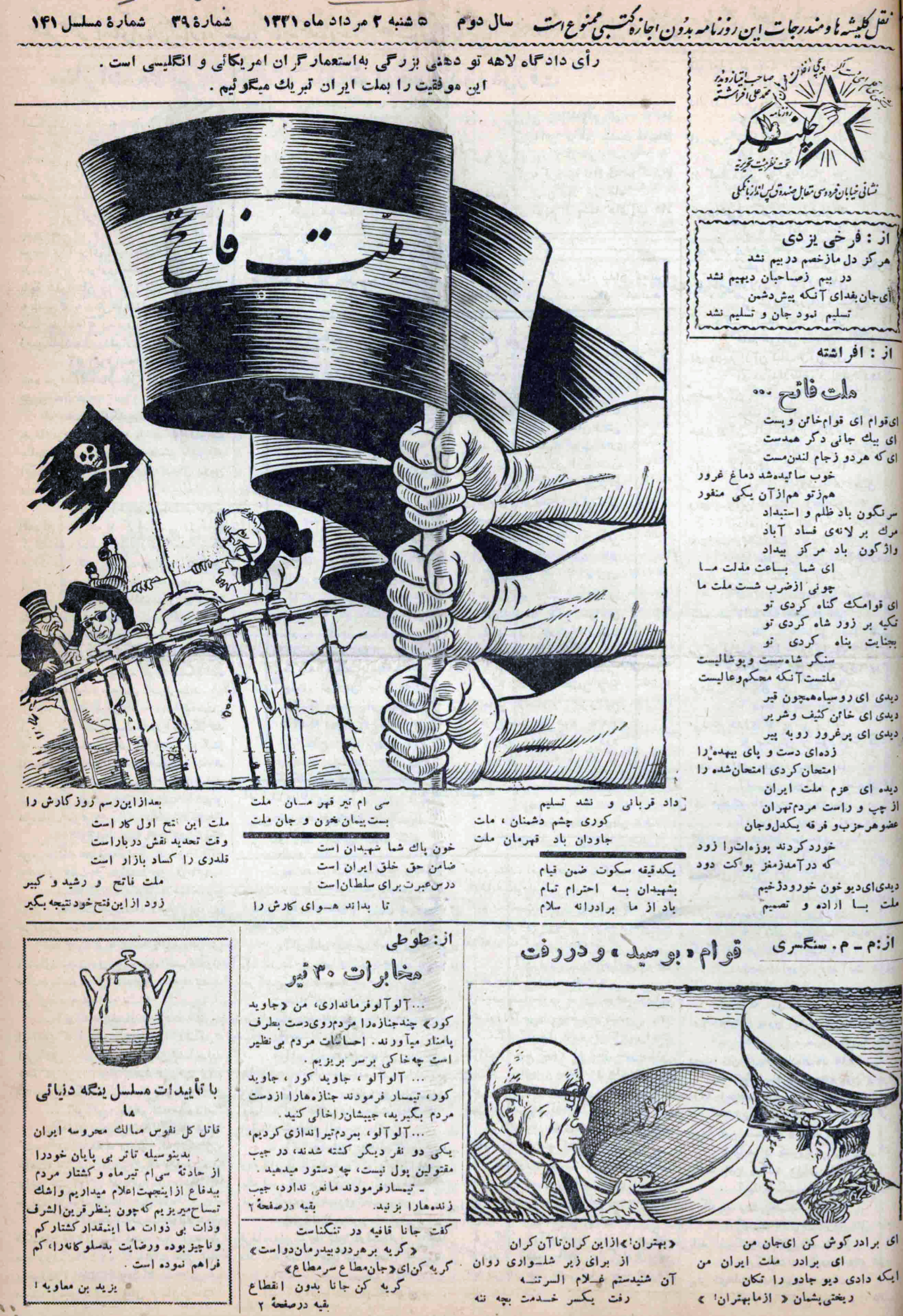 Chelengar’s twilight came, together with most of the periodicals of that period, with the August 1953 Coup. By that time, the publication had fallen afoul of the Iranian authorities and had been obligated to change its main title and logo a few months earlier, as they were subject to a permanent ban by law enforcement authorities. Afrashteh, who had been side-lined in favour of Central Committee loyalists in March 1953, and whose reverential travelogue of the Soviet Union was being serialized just as Mossadegh was removed from power, was forced into exile and settled in Bulgaria, the part of the Eastern bloc he deemed most geographically similar to his native Gilan. He continued his work in the Bulgarian satirical community until his death in 1959.

Other members of the editorial board would go on to storied careers in Towfiq and other post-coup publications. Chelengar’s short-lived reincarnation, Ahangar, suffered a quick demise after just 16 issues. While it was less focused on the broader Cold War, it succumbed to the same afflictions as its legendary predecessor: intolerance for a brand of satire that challenged many norms, from the literary to the political, under the guidance of a bright Red Star.