Explore More
Close
Africa Up Close
Coronavirus
What are the Prospects for Financial Systems in African Countries Post-COVID-19?
Share on FacebookShare on TwitterShare via Email
SharePrint
Blog post

The impact of the ongoing U.S.-China trade dispute has gone far beyond the borders of the two countries calling the shots. From the IMF to investment banks on Wall Street, voices cautioning against escalating tensions and the risks posed by failure to resolve differences have been loud and clear. The uncertainty alone caused by the growing tensions between Washington and Beijing have been destabilizing for the region. What has been less evident, though, is that Sino-U.S. trade friction have already begun to benefit Southeast Asia. Coupled with the new opportunities to access capital from the competing Belt and Road Initiative and the Free and Open Indo-Pacific initiative, the ASEAN countries may be the biggest winners of heightening great power competition to date.

Such a situation would be a tremendous risk from the global economy, but at the same time, the ADB estimates that Vietnam in particular as well as Taiwan would get a big boost from companies seeking to invest away from China.

In fact, a prolonged conflict between Washington and Beijing could actually make markets outside of China more attractive to investors seeking to solidify their foothold in the Asia-Pacific. According to the Asian Development Bank’s latest Asian Development Outlook report released in April, Malaysia and South Korea in particular would gain from the redirection of investments that would have gone into China. Under a worst-case scenario where Sino-U.S. trade tensions persist and the United States would not only keep the tariffs on $250 billion of goods coming in from China, but also increase the rate to 25 percent from 10 percent, while expanding that rate to an additional $325 billion worth of Chinese goods. Meanwhile, China would retaliate in kind against products coming in from the United States into its own market. Such a situation would be a tremendous risk from the global economy, but at the same time, the ADB estimates that Vietnam in particular as well as Taiwan would get a big boost from companies seeking to invest away from China.

...the ongoing trade dispute between Beijing and Washington creates another opportunity for the more competitive Southeast Asian countries to benefit from the broader rivalry between the world’s two largest economies.

Of course, Vietnam as well as Thailand have already been especially attractive to manufacturers looking to establish their production sites away from China as they fret about a slowdown in the Chinese economy on the one hand, and increased costs of operating in the PRC as it goes up the value chain itself. Nonetheless, the ongoing trade dispute between Beijing and Washington creates another opportunity for the more competitive Southeast Asian countries to benefit from the broader rivalry between the world’s two largest economies.

The expansion of China’s Belt and Road Initiative and Beijing’s financial incentives to neighboring countries in particular have undoubtedly created new opportunities for Southeast Asia, especially Thailand, Vietnam, and Indonesia. While the three countries continue to grapple pushing back against China’s territorial claims in the South China Sea, the capital Beijing is willing to provide for infrastructure development is enticing. But the bigger gain comes from the competition against Chinese influence, not least the United States as well as Japan increasing their bid to offer alternative sources of capital, most notably through the Fair and Open Indo-Pacific initiative.  Granted, U.S. actions to compete against BRI’s financial muscle remain uncertain, given that details of the 2018 U.S. Build Act, specifically in unveiling specifics about which projects Washington will prioritize and how it expects to move forward with private-public partnerships, remain to be seen.

Japan, meanwhile, remains the biggest financial supporter of Southeast Asia to date. There are about 83,000 Japanese corporate expatriates in the region, up 32 percent from 2012, while the number in China fell 16 percent to 70,000, according to the Japanese Ministry of Foreign Affairs. There are in fact more Japanese executives in Southeast Asia than in any other region in the world, including the United States and Europe. Increased competition from China has led Tokyo to target its development assistance strategy to the region further, as Japan is now promoting itself as a provider of quality aid that leads to sustainable growth rather than unsustainable debt.

With the BRI and FOIP offering competing visions and resources, Southeast Asian nations can clearly come out ahead by working together with both initiatives, rather than choosing one over the other. The ongoing trade dispute will create even more opportunities for the region moving forward. 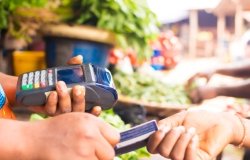 Africa Up Close
Coronavirus
What are the Prospects for Financial Systems in African Countries Post-COVID-19?