To understand how Russian intelligence views the world, look to its history in Southern Africa

South Africa was a major intelligence battlefield during the Cold War. Warsaw Pact intelligence agencies had full agendas: fomenting regime change in Pretoria, supporting the war in Angola, and aiding Communist/anti-Colonial/national liberation/etc. movements across the continent.

South African nuclear activities were also monitored from above. Satellite imagery tipped off the Soviets to preparations for a nuclear test in 1977 in the Kalahari Desert, which were confirmed on the ground by a South African naval officer who was passing information to Russian military intelligence. The Soviets then alerted the White House, and US intelligence confirmed the nature of the preparations to their own satisfaction by flying a plane and a satellite over the site.

The Cold War adversaries teamed up successfully in pressuring the South Africans into stopping the test, disproving the naysaying CIA assessment:

“We perceive no credible threat which would be sufficient to deter South Africa from carrying out a test; indeed, our reading of the Afrikaner personality suggests that threats would have the opposite effect to that intended.”

The open historical record reveals little about the threat Carter and Brezhnev sent the South Africans, but it evidently worked.

The East German Stasi also contributed propaganda to the global anti-apartheid movement. They sought to kill two birds by working to expose West German cooperation with South Africa. Tasked by the Communist Party’s Central Committee in May 1964, the Department of Agitation began collecting information on Bonn’s military assistance to the apartheid regime and details of the involved personnel.

The resulting report made much of West Germany’s interest in South African uranium as a possible ingredient for developing its own nuclear weapons.

Of particular interest was Friedrich von Mellenthin, formerly a Major-General in the German Army during the Second World War, whose presence in South Africa was believed to hold great propaganda potential. The Stasi could not find much on him; the general's most sinister plot was to write a still-popular apologia on Wehrmacht armored tactics.

The report received some press coverage in 1965 and reappeared two years later, when it was cited by the Soviet representative during negotiations for the nuclear Nonproliferation Treaty. British diplomats cabled their embassy in Bonn for an evaluation, which found few facts to check:

“We do not really feel that there are properly speaking any "hard allegations" in the East German pamphlet. There are a few facts about German/South African collaboration in nuclear energy and space, a lot of surmise, and some innuendos. […] We have no means of knowing for sure if there is anything sinister in Germany's activities. We can only say that from the facts her activities seem to be logical commercial ones.”

The work to expose Western collaboration—real and imagined—with the South African government continued beyond the 1960s. Much of the language and allegations used in the Stasi documents re-appear in the publications of the Anti-Apartheid Movement’s disarmament branch. Known as the World Campaign Against Military and Nuclear Collaboration with South Africa, the group campaigned to enforce the arms embargo and have South Africa expelled from the IAEA. (See below for a brochure found in the Swiss foreign ministry files.) I haven’t seen direct proof of Stasi contributions to the group, but financial and logistical support would be consistent with Communist-bloc intelligence practice. 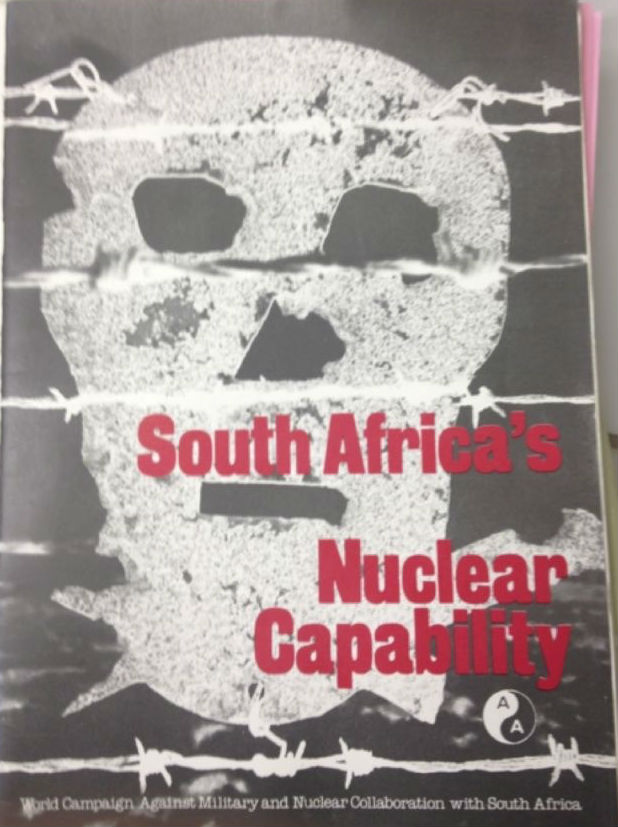 The Campaign was led by Abdul Minty, who became South Africa’s post-apartheid representative to the IAEA. As a nuclear disarmament advocate and outspoken diplomat, his debating points make more sense in their politics than their physics. After three rounds of voting in 2009, Ambassador Minty lost his bid to become director-general of the nuclear agency, having been supported by developing countries disenchanted with the world nuclear order.

The Stasi also provided more applied training to the anti-apartheid movement. As part of East German sponsorship of various African armed movements, African National Congress (ANC) cadres were eager students of "Stasi University’s” so-called “political-military courses” on leadership and combat. As an example, nearly 100 ANC members were enrolled in insurgency training in 1984. After the ANC came to power, their intelligence personnel joined South African intelligence agency, reportedly producing a tradecraft clash on par with the ideological differences and personal animus between the former adversaries.

What's so scary about peace, love, and understanding?

As Soviet bloc intelligence agencies worked to spread “liberation” and “peace” abroad, they believed Western work to promote “liberty” and “democracy” mirrored their own tactics. In some cases, they were not mistaken.

Perniciously, Soviet security services and their offshoots theorized that any form of disobedience could only be the result of the enemy's dark plotting. For example, the Stasi’s official dictionary categorized non-violent resistance as:

the enemy's concept and practice, which uses enhanced psychological warfare, especially political-ideological diversion and through the use of other enemy and subversive means and methods, in order to incrementally hollow out the power of the state and achieve positions of power in individual socialist countries. Non-violent resistance is a model for planning and organizing the counter-revolution. It is a variant of imperialist warfare adapted to the change in the correlation of forces between the classes in the world. It is the enemy's attempt to carry out the counterrevolution in a way that makes it impossible for socialist countries to provide assistance in solidarity to the country under attack. Strategy and tactics of non-violent resistance are to be realized incrementally under the leadership and influence of imperialist secret services and in close collaboration with other enemy centers. […] The models of non-violent resistance show the similarity to the strategy and tactics of clandestine warfare and one can observe the possibilities of their combination.

In the eyes of the Stasi, even the most peaceful dissent was the work of Western intelligence—on par with covert action.

Intelligence documents from the Warsaw pact are a window to Russia’s current views on Western democratizing initiatives. From the Kremlin’s perspective, Russia’s conspicuous hybrid warfare is only fighting Western subversion with fire of its own—just as they did in South Africa.