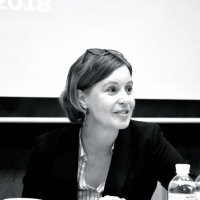 Ukraine recently hosted the largest Pride march in the history of the nation. Participants numbered around 8,000, a nearly tenfold increase over the first gathering's showing in 2013.

This year’s event was held on June 23 and was billed as part of public activities taking place around the world by marchers calling for gender equality and other issues affecting LGBTQ communities. For the first time, Ukrainian military service people, veterans, and government employees from the Ministry of Health also joined Ukraine’s march.

The NGO Kyiv Pride, whose director is Ruslana Panukhnyk, exhibited a high level of professionalism in coordinating the event. Registrants received an email one day ahead of the march with instructions to gather on June 23, 2019, at 10 a.m. at the Kyiv Opera, along with guidance on how to conduct themselves to ensure their own safety. There was also a map of the route, which wound for two blocks around the center, ending at the Teatralna Metro Station. Logistics have been honed over the years, and things have come a long way since the early marches.

But success is never achieved without challenges.

Ukrainian state police detained several people beforehand who had been planning counterdemonstrations or who had carried out actual provocations against the demonstrations. No one was detained during the event. One marcher was attacked after the event, sustaining minor injuries. This is in contrast to the fifty-seven people detained and five injured in 2018, according to Hromadske.

The overall success of the 2019 march might suggest increasing levels of tolerance and democracy in Ukraine. Recent data say otherwise.

One of the key gains resulting from the Maidan Revolution of Dignity in 2013–2014 was passage of the Anti-Discrimination Law in 2015. But Human Rights Watch reported an uptick in hate crimes in 2018, noting the failure of police and officials to respond to requests to track down assailants and conduct investigations. Amnesty International's 2017–2018 report noted attacks on people participating in LGBT events, the killing of Roma, and Ukraine's failure to ratify the Council of Europe Convention on combating violence against women and domestic violence, also known as the Istanbul Convention, which was approved by Ukraine’s Parliament in 2011.

On June 18, 2019, a few days before the march, far-right groups announced online that they would hold a counterdemonstration in front of Ukraine’s presidential administration building.

The Bellingcat Monitoring Project had issued details on Twitter about the counterdemonstrators’ announcement, which was posted by a newly formed Ukrainian far-right extremist anti-LGBTQ online umbrella group, Tradition and Order, whose motto is “Nation, Faith, Family.”[i] According to Bellingcat, the group includes members of other far-right groups, including Kateon, Bratstvo, and C14. They had gotten together through a channel of the online platform Telegram, Oppose LGBT. Eduard Yurchenko, founder of a new anti-LGBT group Orden, planned to join the counterdemonstration, along with Yuri Noevoy, deputy to the Kyiv Oblast Administration from the far-right political party Svoboda and a leader of actions against LGBTQ and feminist groups.

Along with countering the LGBT march, it was reported that many of the estimated 463 members of the group adopted neo-Nazi user-names or positions. One known member is the far-right Serhiy Mazur, of C14, a radical ultranationalist group that last year used its Facebook page to call for attacks on a Roma camp in Kyiv. Messaging from these groups also circulates in other far-right Telegram channels, including AVTONOM.NS, described by Bellingcat as "an openly neo-Nazi channel that shares violent anti-LGBT, anti-Roma, racist content" and which names its targets.

Many are now asking why there is not a greater outpouring of support from Western institutions against the far-right extremist groups endangering society in Ukraine. This is not a new problem and is not unique to Ukraine, as officials in Germany and Poland especially have had to struggle with keeping such groups at bay, while opening a dialogue about the legacy of the Holocaust, globalized white supremacy, and the enforcement of nationwide public policies against hate crimes. The U.S. Department of Homeland Security has also issued reports on the threats posed by rising white supremacist groups, extremism, and the hate crimes increasingly perpetrated within the United States by American citizens.

Taking a stand and enforcing laws to prevent civilian violence is also a human rights imperative. The politicization of gender and LGBTQ rights through false narratives that support an exclusionary, nationalistic agenda propagated by the far right damages individuals and society. Gender rights are neither left nor right by the measure of any national spectrum. In 2017 the U.S. embassy in Kyiv issued a joint statement signed by ambassadors to Ukraine from Canada, the EU delegation, and several other nations opposing the positions expressed by such groups (Joint Statement May 17 2017).

Embassies and officials in Western institutions must recognize their responsibility to name the shared problem of far-right extremism and oppose it. Ukraine’s officials should be formally held to account for their inaction in the face of the threat to public safety posed by such organized groups and the challenge they mount to Ukraine’s Anti-Discrimination Law, one of the key tenets of the EU-Ukraine Association Agreement. Once the problem is returned to the center of the diplomatic table, better practices and policies can be developed and enforced. With time, and the sustained energy of Kyiv’s marchers, mutual tolerance may prevail. The stakes are global.

[i] The Bellingcat Monitoring Project is a new initiative involving several journalists from the Bellingcat organization, an internationally recognized media watchdog. Two journalists on the initiative are Alexei Kuzmenko, who specializes on Ukraine, and Michael Kolborn, who attended last year’s Kyiv Pride march.