Between Containment and Rollback: The United States and the Cold War in Germany 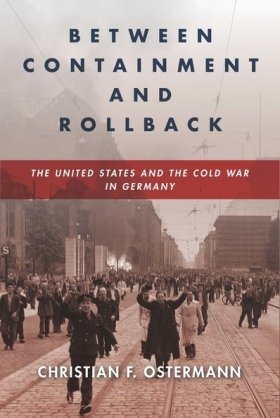 In the aftermath of World War II, American policymakers turned to the task of rebuilding Europe while keeping communism at bay. In Germany, formally divided since 1949,the United States prioritized the political, economic, and, eventually, military integration of the fledgling Federal Republic with the West. The extraordinary success story of forging this alliance has dominated our historical under-standing of the American-German relationship. Largely left out of the grand narrative of U.S.–German relations were most East Germans who found themselves caught under Soviet and then communist control by the post-1945 geo-political fallout of the war that Nazi Germany had launched. They were the ones who most dearly paid the price for the country's division. This book writes the East Germans—both leadership and general populace—back into that history as objects of American policy and as historical agents in their own right.

Based on recently declassified documents from American, Russian, and German archives, this book demonstrates that U.S. efforts from 1945 to 1953 went beyond building a prosperous democracy in western Germany and "containing" Soviet-Communist power to the east. Under the Truman and then the Eisenhower administrations, American policy also included efforts to undermine and "roll back" Soviet and German communist control in the eastern part of the country. This story sheds light on a dark-er side to the American Cold War in Germany: propaganda, covert operations, economic pressure, and psychological warfare. Christian F. Ostermann takes an international history approach, capturing Soviet and East German responses and actions, and drawing a rich and complex picture of the early East–West confrontation in the heart of Europe.