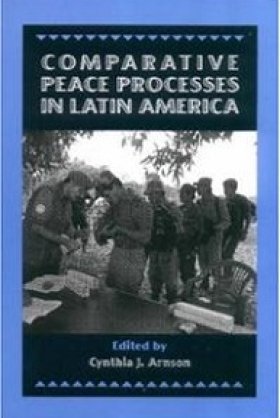 Presenting a carefully structured comparative analysis of six Latin American countries—Nicaragua, El Salvador, Guatemala, Mexico, Colombia, and Peru—that experienced guerilla warfare that outlasted the end of the Cold War, this volume explores the unique constellation of national and international events that allowed some wars to end in negotiated settlement, one to end in virtual defeat of the insurgents, and others to rage on. The contributors also examine comparatively such recurrent dilemmas as securing justice for human rights abuses, reforming the military and police forces, and reconstructing the domestic economy.

Cynthia J. Arnson is director of the Latin American Program at the Woodrow Wilson Center.

Part I: Case Studies and Issues
2. From the Low Intensity War to Low-Intensity Peace: The Nicaraguan Peace Process
Rose J. Spalding
3. Political Transition and Institutionalization in El Salvador
Antonio Cañas and Héctor Dada
4. Peace and Deomcratization in Guatemala: Two Parallel Processes
Dinorah Azpuru
5. The Peace Process in Chiapas: Between Hope and Frustration
Neil Harvey
6. Negotiating Peace amid Multiple Forms of Violence: The Protracted Search for a Settlement to the Armed Conflicts in Colombia
Marc Chernick
7. Peace in Peru: An Unfinished Task
Carlos Basombrío
8. The Decimation of Peru’s Sendero Luminoso
Cynthia McClintock
9. The Role of the United Nations in El Salvador and Guatemala: A Preliminary Comparison
Teresa Whitfield
10. Between Memory and Forgetting: Guerrillas, the Indigenous Movement, and Legal Reform in the Time of the ZLN
Luis Hernández Navarro
11. Indigenous Identity and Rights in the Guatemalan Peace Process
Roger Plant

“Editor Arnson and 19 collaborators…assess the factors that contribute to a nation-state’s capacity to reconstruct a functioning and more democratic society after that society has been riven by internal armed conflict.… The volume has a high degree of internal consistency among the case studies, and Arnson provides both a clear introduction and an insightful conclusion. Recommended.”—J. A. Rhodes, CHOICE

“This is a valuable collection, well organized and professionally edited.”—Terrorism and Political Violence