Democracy and the Internet: Allies or Adversaries? 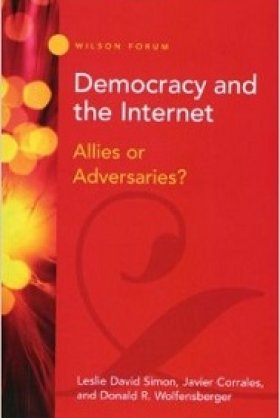 Is the Internet intrinsically democratic, making every user a publisher and supporting new varieties of expression and association? Or is it a dangerous vehicle of propaganda, helping repressive governments to deceive their people and mobs to drive democratic governments to extremes?

In Democracy and the Internet: Allies or Adversaries? three essays draw evidence from starkly different regions of the world. Leslie David Simon turns to one of the world’s least democratic regions, the Muslim nations of the Middle East; Javier Corrales reviews the weak democracies of Latin America, and Donald R. Wolfensberger studies the world’s most visible representative institution, the U.S. Congress.

The authors find that the Internet is generally making a positive difference. In some places people are newly receiving important outside news and communications. In others, human rights organizations and banned newspapers can make their cases online for both domestic and international audiences. Use by extremist groups has caused little damage compared to the benefits. The chief hangup is limited availability, either because the market is too weak to spread technology without government support or because repressive states are restricting access. At Congress, the Internet was crucial in preserving operations when the post-September 11 anthrax attack shut down Capitol Hill, and more opportunities exist, but there is also the danger of overload.

Leslie David Simon is the author of NetPolicy.Com: Public Agenda for a Digital World. A former IBM executive, he is a senior policy scholar at the Woodrow Wilson International Center for Scholars. Javier Corrales is a professor of political science at Amherst College and a former fellow at the Woodrow Wilson Center. Donald R. Wolfensberger is director of the Congress Project at the Center; a longtime Congressional staffer, he is the author of Congress and the People: Deliberative Democracy on Trial.

1. Democracy and the Net: A Virtuous Circle?
Leslie David Simon