Kim Il Sung in the Khrushchev Era: Soviet-DPRK Relations and the Roots of North Korean Despotism, 1953-1964 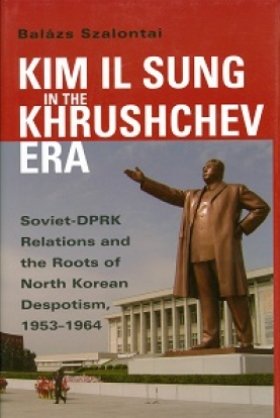 Concentrating on the years 1953–64, this history describes how North Korea became more despotic even as other Communist countries underwent de-Stalinization. The author's principal new source is the Hungarian diplomatic archives, which contain extensive reporting on Kim Il Sung and North Korea, thoroughly informed by research on the period in the Soviet and Eastern European archives and by recently published scholarship.

Much of the story surrounds Kim Il Sung: his Korean nationalism and eagerness for Korean autarky; his efforts to balance the need for foreign aid and his hope for an independent foreign policy; and what seems to be his good sense of timing in doing in internal rivals without attracting Soviet retaliation. Through a series of comparisons not only with the USSR but also with Albania, Romania, Yugoslavia, China, and Vietnam, the author highlights unique features of North Korean communism during the period. Szalontai covers ongoing effects of Japanese colonization, the experiences of diverse Korean factions during World War II, and the weakness of the Communist Party in South Korea.

Balázs Szalontai is Research Associate at the Institute for International Education, Seoul.

4. A Challenge to the Leader

8. The Matrix of North Korean Despotism

“It is a major contribution to our understanding of North Korean history and the contemporary North Korean regime, and given the current issues surrounding North Korea, should attract considerable interest.”—Carter J. Eckert, Harvard University

“There is to date nothing nearly so detailed and precise as Szalontai’s account.”—Kathryn Weathersby, Cold War International History Project

“Szalontai’s readable history of North Korea focusing on the period from the death of Joseph Stalin to the fall of Nikita Khrushchev is welcome since it is based on previously unexamined sources from the Hungarian National Archives.... The author makes a convincing case that the nature of the North Korean regime was based less on foreign models than on an intense, xenophobic Korean nationalism.... The rich array of comparative insights and their clear presentation should make this book required reading for anyone interested in understanding North Korea.”—American Historical Review

“Szalontai's groundbreaking book marks a significant advance in scholarship on the history of the Democratic People's Republic of Korea. On the basis of extensive research in the Hungarian National Archive and broad knowledge of comparative communism and authoritarianism, Szalontai presents a persuasive analysis of the creation of North Korea’s unusual despotism... [and places] DPRK history squarely within the context of the evolution of other countries in the communist world.”—Pacific Affairs

“In Kim Il Sung in the Khrushchev Era, Hungarian scholar Balazs Szalontai presents the first major study of post-Korean War North Korea based primarily on East European documents. His extensively researched, impressively detailed and insightful book does a great service to the fields of Korean studies, Cold War history, and the history of Communist regimes. It should be required reading for anyone curious about the workings of this reclusive country, not least the policymakers in Washington...”—Moscow Times

“This book, a rigorously documented analysis of Kim Il Sung’s despotism, is important reading for any serious student of North Korea.”—Asian Affairs

“...this work represents a significant contribution to the understanding of North Koreas unique role within the Soviet and Chinese spheres of influences during the second and third decades of the Cold War.”—CHOICE

“The book is an example of first-class scholarship, and it should be read by everyone who is interested either in North Korea or Communism.”—The International History Review