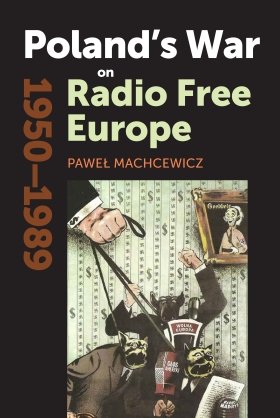 For the Soviet bloc, the struggle against foreign radio was one of the principal fronts in the Cold War. Poland’s War on Radio Free Europe, 1950–1989 tells how Poland conducted this fight, a key part of the wider effort “to control the flow of information and ideas, which largely determined the Communist regimes’ ability to command their societies and to meet their political and ideological goals,” according to Paweł Machcewicz.

This is the first book in English to use the unique documents of Communist foreign intelligence operations so widely, and it also employs propaganda materials and personal interviews with Radio Free Europe people and with party and security functionaries. The English translation reflects further discoveries of documentation since the original publication in Polish in 2007.

Paweł Machcewicz is a professor at the Institute of Political Studies of the Polish Academy of Sciences, Warsaw, and director of the Museum of the Second World War in Gdańsk. He was a Public Policy Scholar at the Wilson Center in 2013 and was a Cold War International History Project Scholar at the Center in 1994 and 2007.

1. Radio Free Europe: Its Genesis and Its Place in the Cold War

“Richly sourced, this is a compelling account of the lengths to which states and individuals will go to define their ideological narratives.… Highly recommended.”—R. K. Byczkiewicz, Choice

“The revised and expanded translation of his 2007 Polish-language monograph contributes to the growing body of literature about Cold War broadcasting and surveillance alike.… [The Polish sources’] keystone role in Machcewicz’s account, and the author’s extensive verbatim citations from them, render an entirely new chapter of RFE’s history accessible far beyond Poland.”—Yuliya Komska, H-Diplo

“General readers will find this a fascinating and dramatic account of an important and often quirky institution, and of the Polish regime’s decades-long campaign to neutralize its impact. It reads like a Cold War thriller.”—Robert L. Hutchings, University of Texas at Austin

“The work excels in its use of forensic research in Polish secret service archives and its reconstruction from partial data of a range of regime countermeasures. It impressively marshals secondary Polish literature, some of which also draws on archival research. Its focus is not the organization and operations of RFE, but the Polish regime’s efforts to counter them. It illuminates the world-view of the Polish regime and its secret services.”—A. Ross Johnson, former director, Radio Free Europe