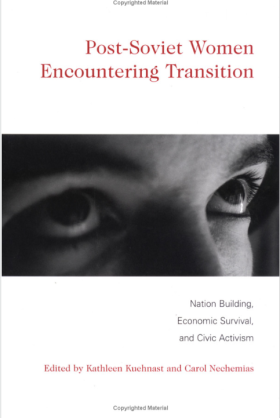 Women in the former Soviet Union, despite a legacy of high levels of education and labor force participation, face a host of new problems, according to editors Kathleen Kuehnast and Carol Nechemias. Neo-familialist ideologies have arisen, with a longing for the return of traditional families. A gendered division of labor in the market economy has pushed women to the bottom of the pyramid of small businesses as bazaar merchants. And in the political arena, men dominate formal government structures and political parties, while women dominate the realm of non-governmental organizations.

Post-Soviet Women Encountering Transition studies these problems through a series of essays by social scientists from the United States, Europe, and the former Soviet Union, going beyond coverage of Russia and ethnic Russians to treat Armenia, Azerbaijan, Belarus, Kazakhstan, Ukraine, Uzbekistan, and the Tatar and Sakha Republics of Russia.

Through anthropology, political science, and other disciplines, the contributors examine women’s role in nation-building, rural household economies, and democratization and civic activism. A final set of essays studies the interaction of post-Soviet women with Western aid organizations, which often pursue strategies not consonant with the situations and expressed desires of the women they are trying to help.

Kathleen Kuehnast is a research associate at George Washington University, and Carol Nechemias is an associate professor of public policy at Pennsylvania State University, Harrisburg.

“[The essays] do not dwell on the deteriorating situation of women in the former USSR, but rather look at the ways women cope, and the role of foreign aid and local NGOs in current and future development.”—Choice

“Notable for its explicit aim to contribute ‘something interesting…to not only the scholarly literature but also to the policy community.’”—Sarah D. Phillips, Canadian Slavonic Papers

“Sophisticated in approach, rich in detail and powerful in its message.”—Jenny R. Wustenberg, Political Studies Review