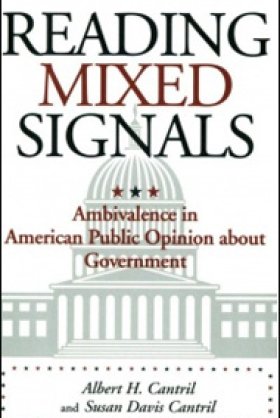 What should the place of government be in the life of the nation? If you turn to the public for an answer to this question, you confront a paradox. What people say about government as a general matter is often at odds with what they actually want it to do. This is seen most often when people say government is doing too many things and at the same time want its activities in a host of areas continued, if not expanded.

Based on a specially designed national public opinion survey, this book explores the paradox and the difference it makes. Ambivalence about government affects which voices get heard in our politics—and which do not. It bears on the parties people support, whether they vote, and how they vote. Those who send mixed signals about government can tip the balance in elections and are key to coalitions of support on issues between elections.

The analyses presented here go beyond the give and take of the current scene to shed important light on the nature of public opinion itself. The authors show that ambivalence about government is an identifiable and enduring feature of American public opinion.

2. Gauging the Public’s Ambivalence about Government

3. Government Performance and Ambivalence about Government

4. Issues and Ambivalence about Government

5. Personal Situation and Ambivalence about Government

6. What Lies Behind Ambivalence about Government?

7. Some Political Consequences of Ambivalence about Government

“This book takes a seeming contradiction as its starting point and demonstrates that there is considerable coherence to what others have dismissed as noise. It offers fresh insight into public opinion, as well as holding considerable implications for the effective conduct of government and successful political leadership.”—Arthur H. Miller, The University of Iowa

“When it comes to their preferred role for government, many Americans manage to be both conservative and liberal at the same time.… Reading Mixed Signals offers an up-to-date and comprehensive analysis of this fascinating paradox which has proven to be an enduring feature of American public opinion.”—Michael Kagay, New York Times

“This volume—rich in insights far beyond what can be summarized here—imparts one lesson no politician or political reporter should ever forget. People think in more than one dimension. It is far too easy to categorize voters in simplistic liberal or conservative camps or to create stereotypes like soccer moms or angry white males that conceal more than they reveal. The Cantrils’ [conclusions] serve as a rebuke to all such thinking.”—David Broder, Washington Post Book World

“This book takes a seeming contradiction and demonstrates there isconsiderable coherence to what others have dismissed as noise. It offers fresh insight into public opinion, as well as holding considerable implications for the effective conduct of government andsuccessful political leadership.”—Arthur H. Miller, Professor of Political Science, University of Iowa

“It is unusual for scholarship and newsworthiness to blend so fortuitously.”—Bernard Roshco, former editor, Public Opinion Quarterly

“After years of listening to politicians tell us what the American people think about government, it is a welcome event when two first-rate social scientists systematically find out the answer.”—Ken Bode, Dean, Medill School of Journalism, Northwestern University

“This is the most ambitious attack ever on a long-standing puzzle in public opinion research. Scholars will pore over the data and analyses in this book for years to come.”—Morris P. Fiorina, Senior Fellow, Hoover Institution, Stanford University