Russian Eurasianism: An Ideology of Empire 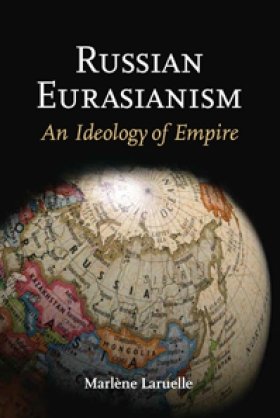 Since the dissolution of the Soviet Union, Russia has been marginalized at the edge of a Western-dominated political and economic system. In recent years, however, leading Russian figures, including former president Vladimir Putin, have begun to stress a geopolitics that puts Russia at the center of a number of axes: European-Asian, Christian-Muslim-Buddhist, Mediterranean-Indian, Slavic-Turkic, and so on. This volume examines the political presuppositions and expanding intellectual impact of Eurasianism, a movement promoting an ideology of Russian-Asian greatness, which has begun to take hold throughout Russia, Kazakhstan, and Turkey. Eurasianism purports to tell Russians what is unalterably important about them and why it can only be expressed in an empire. Using a wide range of sources, Marlène Laruelle discusses the impact of the ideology of Eurasianism on geopolitics, interior policy, foreign policy, and culturalist philosophy.

2. Lev Gumilëv: A Theory of Ethnicity?

3. Aleksandr Panarin: Philosophy of History and the Revival of Culturalism

4. Aleksandr Dugin: A Russian Version of the European Radical Right?

5. The View from "Within": Non-Russian Neo-Eurasianism and Islam Political Parties

6. Neo-Eurasianism in Kazakhstan and Turkey

Conclusion: The Evolution of The Eurasian(ist) Idea

“Russian Eurasianism is a lucid and rational guide, based on thorough scholarship and an admirable reluctance to sensationalize or to claim too much.”— Edmund Griffiths, Times Literary Supplement

“Laruelle is to be congratulated on her lucid and intellectually disciplined discussion of the ambiguous, intricate, and often contradictory ideas that shape Russian Neo-Eurasiansim.… a must-read for intellectual historians, policymakers, cultural scholars, Russia Watchers, or for that matter, anyone who uneasily senses that something is moving in the deep currents beneath the surface of contemporary Russia, but is not sure of what it is.”— Maria Carlson, Russian Review

“A richly interdisciplinary and meticulously researched analysis of both the historical and contemporary sources of Eurasianist cultural and philosophical/ideological traditions and discourse.… this book will be an invaluable resource for policymakers and academics providing a deeper understanding of the forces shaping Russia’s identity and the unfolding of circumstances for the entire Eurasian region.”— Sharyl N. Cross, Journal of Slavic Military Studies

“This book is a tour de force not merely because of the depth of the scholarship and the skill of the argument but also because Laruelle unveils a subject crucial to understanding today’s Russia but never given proper due. Eurasianism, a much-bandied-about label meant to bundle together Russian nationalisms that set the country off from and usually against the West, in fact has a long and remarkably dense intellectual history stretching back to the 1920s (and with antecedents in the nineteenth century). Laruelle unpacks a maze of exceedingly obscure ideas and links that, notwithstanding their often crosscutting and even contradictory nature, frame a deep emotional base justifying the notion that Russia is primordially distinct from both Europe and Asia—eternal and spiritually superior. Even the most serious student of contemporary Russia will get from this book a vastly deeper sense of what makes Russian intellectual life, for all of its vexed affinity with the West, fundamentally different.”—Foreign Affairs

“The importance of this work lies in the remarkable, even extraordinary, research effort that underpins its writing. The work’s best features are the breadth of its coverage and the trenchancy of its analysis.”—John B. Dunlop, Hoover Institution

“This book is an impressive achievement—wide-ranging yet sensitive to context and careful to bring together the many varieties of Eurasianism that have emerged over the 20th century. Laruelle makes us see why and how the idea of empire continues to appeal in post-Soviet space.”—Willard Sunderland, University of Cincinnati