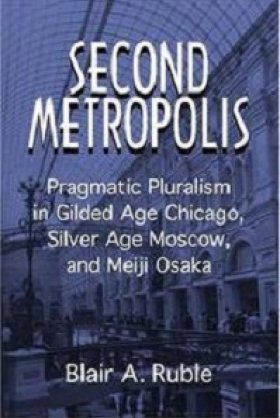 By comparing North America’s, Russia’s, and Japan’s “second cities”—Chicago, Moscow, and Osaka—Second Metropolis discloses the extent to which social fragmentation, frequently viewed as an obstacle to democratic development, actually fostered a “pragmatic pluralism” that nurtured pluralistic public policies. Such policies are explored through six case studies—the politics of street railways and charter reform in Chicago, adult education and housing in Moscow, and harbor revitalization and poverty alleviation in Osaka—that illustrate how even those with massive political and economic power were stymied by the complexity of their communities. Chicago, Moscow, and Osaka, although the products of very different nations and cultures, nonetheless shared an important experience of inclusive politics during an era of extraordinary growth and social diversity. The success of all three cities, which went well beyond mere survival, rested on a distinctive political resource: pragmatic pluralism.

Blair A. Ruble is the director of the Kennan Institute for Advanced Russian Studies, a program of the Woodrow Wilson International Center for Scholars, where he is also codirector of the Comparative Urban Studies Project. He is the author of Leningrad: Shaping a Soviet City and Money Sings: The Changing Politics of Urban Space in Post-Soviet Yaroslavl.

1. Introduction: From Hegemony to Pragmatic Pluralism

“This is a lively, well-researched book with a forceful argument.”—James Gilbert, Journal of Economic History

“A comparative work such as this helps to undercut the historiography of ‘exceptionalism’ that still plagues Russian studies.”—Louise McReynolds, American Historical Review

“This book provides a convenient history of three major cities and their similar efforts to mediate differences while solving problems, despite the enormous gaps in their political systems.”—Choice

“[T]his is an impressive work of scholarship.”—Journal of International Migration and Integration

“Second Metropolis is conceptually interesting.… Ruble has written a work of history.”—Slavic Review