Sovereignty Experiments: Korean Migrants and the Building of Borders in Northeast Asia, 1860-1945 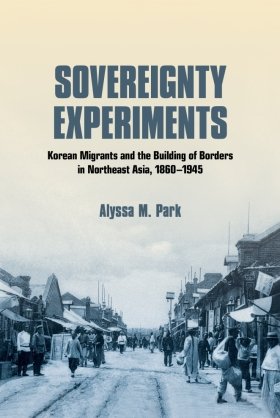 Sovereignty Experiments tells the story of how authorities in Korea, Russia, China, and Japan―through diplomatic negotiations, border regulations, legal categorization of subjects and aliens, and cultural policies―competed to control Korean migrants as they suddenly moved abroad by the thousands in the late nineteenth century. Alyssa M. Park argues that Korean migrants were essential to the process of establishing sovereignty across four states because they tested the limits of state power over territory and people in a borderland where authority had been long asserted but not necessarily enforced. Traveling from place to place, Koreans compelled statesmen to take notice of their movement and to experiment with various policies to govern it. Ultimately, states' efforts culminated in drastic measures, including the complete removal of Koreans on the Soviet side. As Park demonstrates, what resulted was the stark border regime that still stands between North Korea, Russia, and China today.

Skillfully employing a rich base of archival sources from across the region, Sovereignty Experiments sets forth a new approach to the transnational history of Northeast Asia. By focusing on mobility and governance, Park illuminates why this critical intersection of Asia was contested, divided, and later reimagined as parts of distinct nations and empires. The result is a fresh interpretation of migration, identity, and state making at the crossroads of East Asia and Russia.

"Sovereignty Experiments is a terrific piece of transnational, multilingual research. With rich stories of smugglers, bandits, spies, and political intrigue, Park shows how a seemingly remote spot at the margins of Chinese, Russian, and Korean territory illuminates fundamental questions for any historian of early twentieth century global history. A riveting and entertaining read."

~ Andre Schmid, University of Toronto, author of Korea Between Empires

"Alyssa Park paints a detailed picture of Korean migrant communities in the Far East. There is no question that this book will make a significant empirical contribution to the literature and be of interest to scholars of Korean, Russian, Chinese, and Japanese history."

"Alyssa Park has given us a fascinating book about the borderlands of the Tumen river valley in northeast Asia and the struggles over its control in the late nineteenth century by Chosŏn Korea, Qing China, Imperial Russia, and Japan. She shows how sovereignties came to be defined, not principally by diplomats or even by war, but over the allegiance of the Korean migrants who settled the area. This is an important book for East Asian history and global borderlands studies."