The Fog of Law: Pragmatism, Security, and International Law 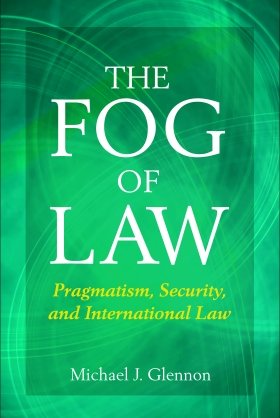 When and why are international rules binding? Focusing on questions of state security, The Fog of Law considers the nature of obligation in international law. In so doing, it challenges the prevailing theories of obligation based on natural law or positive law approaches.

Michael J. Glennon argues for a pragmatist approach to international law—that international law has force when enough countries honor it. Using elements of rational choice theory, Glennon describes an international “frame of mind” that draws on the fluctuating network of incentives and disincentives surrounding international rules to explain states’ uneven compliance. The Fog of Law defends its approach through discussions of key contemporary security issues, including the United Nations’ use of force rules, security assurances, nuclear proliferation, and the new crime of aggression proposed for the International Criminal Court.

Michael J. Glennon is Professor of International Law at the Fletcher School of Law and Diplomacy at Tufts University. He was Legal Counsel to the Senate Foreign Relations Committee and has served as a consultant to the U.S. State Department and the International Atomic Energy Agency.

Chapter One: Does International Law Matter?

Chapter Two: Why Some International Rules Are Not Obeyed

Chapter Three: Why Some International Legal Rules Are Obeyed

Chapter Four: Objections to the Doctrine of Desuetude—and the Pragmatist Reply

Chapter Seven: How Not to Deal with Nuclear Proliferation

Chapter Eight: A Pragmatist View of the United Nations

“Why do states obey some international legal rules and ignore others? In this compelling new book, Professor Michael Glennon argues that neither of the two conventional approaches to international law, naturalism or positivism, can explain the puzzle of state obligation…. Although undoubtedly of great value to scholars, this concise and highly readable argument for a new understanding of international law may be even more important to the politicians and diplomats whose actions shape the international legal order.”—Harvard Law Review

“The Fog of Law represents Glennon’s ambitious effort to synthesize his formidable body of scholarship on legal pragmatism in order to comprehensively reconceptualize international law as an institution … The Fog of Law succeeds as a powerful deconstructionist critique of the present state of international security law.”—Yale Journal of International Law

“Glennon has long been an eloquent critic of traditional approaches to international law derived from idealistic, universalistic, and moralistic tenets. About the legality of the U.S. invasion of Iraq, for example, he has advanced a decidedly skeptical view of international law. In this landmark book, Glennon lays out his alternative take.”—G. John Ikenberry, Foreign Affairs

“Michael Glennon is the most articulate advocate of legal pragmatism since Justice Oliver Wendell Holmes Jr. The Fog of Law provides a rigorous theoretical basis for a recommendation that the UN Charter's rules on use of force be declared in desuetude, and sheds light on the proposed law of aggression and other disputed issues. No defender of legal universalism can afford to ignore the challenge of this book.”—Pierre Hassner, Research Director Emeritus, Sciences Po, Paris

“At a time when many seek peace and security through treaties, statutes, and UN Security Council resolutions, Glennon wisely reminds us that what matters most is not how much law statesmen create, but how much they actually follow.”—Charles Lane, author of The Day Freedom Died: The Colfax Massacre, the Supreme Court, and the Betrayal of Reconstruction

“A most timely contribution that provokes important reflections, whatever one's perspective on the rule of law or the limits of international law. This book deserves to be read widely in the United States and, even more so, beyond its shores, to understand the politics of pragmatism.”—Philippe Sands,University College London

Publication
Security and Defense
Wilson Memo: The Relationship Between Russia & the Baltics