The Future of Merit: Twenty Years after the Civil Service Reform Act 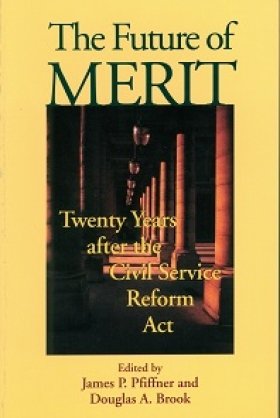 The Civil Service Reform Act of 1978 was the most far reaching reform of the federal government personnel system since the merit system was created in 1883. The Future of Merit reviews the aims and rates the accomplishments of the 1978 law and assesses the status of the civil service. How has it held up in the light of the National Performance Review? What will become of it in a globalizing international system or in a government that regards people as customers rather than citizens?

Contributors examine the Senior Executive Service, whose members serve between presidential appointees and the rest of the civil service. These crucial executives must transform legislative and administrative goals into administrative reality, but are often caught between opposing pressures for change and continuity. In the concluding chapter Hugh Heclo, many of whose ideas informed the 1978 reform act, argues that the system today is often more responsive to the ambitions of political appointees and the presidents they serve than to the longer term needs of the polity. On the other hand, the ambition of creating a government-wide cadre of career general managers with highly developed leadership skills has not been fulfilled.

James P. Pfiffner is professor of government and public policy at George Mason University. Douglas A. Brook is vice president–government affairs for the LTV corporation and former acting director of the Office of Personnel Management.

PART ONE: THE CHANGING ROLE OF THE CIVIL SERVICE
1. Government Legitimacy and the Role of the Civil Service
2. What was behind the 1978 Civil Service Reform?
3. The National Performance Review as Implicit Evaluation of CSRA: Building on or Overturning the Legacy?
4. Senior Executives in a Changing Political Environment

PART THREE: THE FUTURE OF MERIT
8. Onto the Darkling Plain: Globalization and the American Public Service in the Twenty-first Century
9. Politics of Transition from the Administrative to the Facilitative State
10. The Future of Merit

“For those of us concerned about maintaining a competent, effective, and honest civil service, this book vividly and effectively sets out the challenges in doing so. It should be an important part of the agenda for the next President and the next Congress.”—Paul Volcker, former chairman of the Federal Reserve Board and of the National Commission on Public Service

“Passage of the Civil Service Reform Act was controversial, and there is still controversy over its effectiveness. A book of this sort will be well received and anxiously read by specialists in public administration, public policy, and public personnel administration.”—H. George Frederickson, University of Kansas