The Jewish Movement in the Soviet Union 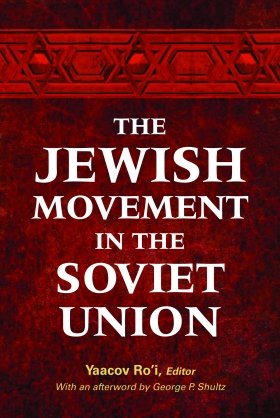 Yaacov Ro’i and his collaborators provide the first scholarly survey of one of the most successful Soviet dissident movements, one which ultimately affected and reflected the demise of a superpower’s stature.

The Jewish Movement saw hundreds of thousands of Soviet Jews leave their native country for Israel. This book grapples with the movement’s origins, its Soviet and international contexts, and its considerable achievements—prior to the mass Jewish emigration of Gorbachev’s last years, about one quarter of a million Jews left the Soviet Union. The contributors, a mix of senior and junior scholars, as well as movement participants, examine the influences of a wide range of contemporary events, including the victory of Israel in the 1967 war, the Soviet dissident and human rights movements, and the general malaise of Soviet society, its self-contradictory attitude toward nationalism, and its underlying anti-Semitism.

The book is based on a combination of secondary research, archival work, and interviews. The epilogue by former secretary of state George P. Shultz discusses support for the Jewish Movement under the Ronald Reagan administration, reactions and views by the United States as Gorbachev came to power, and U.S. satisfaction of his denouement.

Yaacov Ro’i is professor emeritus of history at Tel Aviv University. He is author of The Struggle for Soviet Jewish Emigration, 1948–1967 (1991); and editor of Jews and Jewish Life in Russia and the Soviet Union (1995). He is coeditor, with Avi Beker, of Jewish Culture and Identity in the Soviet Union (1991); with Noah Lewin-Epstein and Paul Ritterband, of Russian Jews on Three Continents: Migration and Resettlement (1997); with Zvi Gitelman, of Revolution, Repression and Revival: The Soviet Jewish Experience (2007); and with Boris Morozov, of The Soviet Union and the June 1967 Six Day War (2008).

Introduction: From Disaffection to Political Opportunity and Activism
Yaacov Ro’i

Part III. The Political Ambience
6. Behind the Scenes: The Attitude of the Regime and Society toward Jewish Emigration
Edith Rogovin Frankel
7. Human Rights and National Rights: The Interaction of the Jewish Movement with Other Dissident Groups
Yaacov Ro’i and Joshua Rubenstein

Part V. The Cultural and Spiritual Setting
10. Jewish Samizdat: Dissident Texts and the Dynamics of the Jewish Revival in the Soviet Union
Ann Komaromi
11. Judaism and the Jewish Movement
Simeon Charny
12. The Teaching and Study of Hebrew
Ari Volvovsky

Part VI. The World Beyond
13. How the Movement Was Funded
Michael Beizer
14. Friends Abroad: How the Western Campaign for Soviet Jews Influenced Activists in the Soviet Union
Sarah Fainberg

“This volume places a wealth of secondary and primary materials, including numerous interviews with participants in the Jewish emigration movement, at the reader’s disposal.… It is an imperative resource for any scholar working on this topic.”—Dmitry Tartakovsky, Soviet and Post-Soviet Review

“The Jewish Movement in the Soviet Union is an important contribution to Soviet Jewish history, revealing new aspects of the Jewish and other dissident movements in the Soviet Union. This book will be interesting for scholars as well [as] for a wider audience interested in the Jewish experience in the USSR.”—Victoria Khiterer, The Russian Review

“This book is a thoroughly researched, annotated, and well-composed study that portrays the unfolding Jewish drama in the former USSR with acuity and insight. It is an important addition to the existing scholarship on those fateful years.”—Aryeh Levin, Israel Journal of Foreign Affairs

“With its focus on the Jewish movement, this book is an important addition to the literature on Soviet Jewry… this book is a must-read.”—Suzanne D. Rutland, Journal of Church and State

“The book makes an important contribution to scholarship on modern Jewish and Soviet history, on the history of social movements, and on the history of transnationalism, pushing the study of the Soviet Jewish national movement into broader, more comparative terrain without losing the centrality and specificity of the Jewish experience.”—Benjamin Nathans, University of Pennsylvania