Track-Two Diplomacy toward an Israeli-Palestinian Solution, 1978–2014 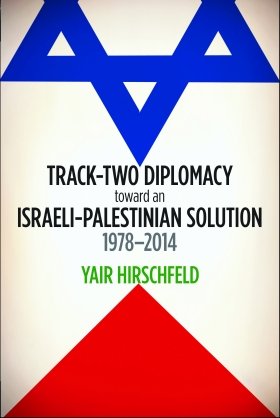 Track-Two Diplomacy toward an Israeli-Palestinian Solution, 1978–2014 is an important insider account of a crucial set of negotiations aimed at settling a seemingly endless conflict. It brings out many new details of negotiating sessions and internal policy and strategy debates and is especially insightful on the thirteen-year process that led to the September 1993 Oslo Accords. Signed on the White House lawn in the presence of Israeli prime minister Yitzhak Rabin and Palestine Liberation Organization chairman Yasser Arafat, the treaty was a landmark occasion followed shortly thereafter by the unraveling of the Israeli-Palestinian permanent status negotiations. The historical narrative focuses on the series of negotiations and ongoing efforts under particular Israeli governments. Each chapter concludes with discussions of successes, failures, and lessons learned.

Yair Hirschfeld is a lecturer at the University of Haifa and director general of the Economic Cooperation Foundation in Israel.

A book launch for Track-Two Diplomacy toward an Israeli-Palestinian Solution, 1978–2014 was held at the Wilson Center on September 17, 2014.

1. The Camp David Accords Lay the Foundations for a Two-State Solution, 1978–79

2. The First Multitrack Diplomacy Efforts and the Unsuccessful “Jordanian Option,” 1979–88

3. A Multitrack Approach to Israeli-Palestinian Negotiations, 1989–91

4. Back-Channel Negotiations in Norway: The Challenges, the Planning, and the Track-Two Efforts of the Oslo Accords, 1991–93

6. Keeping the Oslo Process on Track: Multitrack Diplomacy during the First Netanyahu Government, May 1996–May 1999

7. The March of Folly: Ehud Barak’s Attempt to Conclude a Permanent Status Agreement, May 1999–February 2001

“Yair Hirschfeld’s painstaking and often very personal account of over thirty years of track-two diplomatic efforts of peacemaking between Israeli and Palestinian interlocutors leaves the reader with both optimism and pessimism.… Hirschfeld’s summing up of the successes, failures, and lessons learned at the end of each chapter are insightful and self-critical, but they also serve to highlight and validate the hard labor of those who rarely receive the credit they are due for their confidential and secret work in support of track-one diplomacy.”—Sonja Wentling, H-Diplo

“This book is… a personal account that is likely to remain an unrivalled source for the behind-the-scenes story.”—David McDowall, Times Literary Supplement

“With a tremendous amount of detail and perspective to the story of peacemaking during the past thirty years, the book fixes the historical record in substantial ways. Excellent work.”—Ambassador Daniel C. Kurtzer, Princeton University

“This is an extremely rich and valuable volume. The overall narrative is remarkably complete. There are also copious and detailed notes throughout, mostly pertaining to the events in which Hirschfeld participated, or at least observed, and also often bringing in relevant scholarly literature.”—Mark Tessler, University of Michigan

“If you want to know about back-channel negotiations, this book is a must to read.”—Ambassador Dore Gold, former Permanent Representative of Israel to the United Nations