Skip to main content
Support
Show
Live Now
Ending Wildlife Crime to Protect Animals, Human Health, and the Planet
Watch Now
Play Video
Show
Live Now
Disease-Related Stigmas, Their Origins, Their Persistence, and Have We Learned Anything to Stop Them? A Comparative Look at HIV/AIDS and COVID-19
Show
Live Now
US Farm Labor and Trade in 2021
Explore More
Close
Publication
Urban Studies
Smart Cities and Climate Change: The Evolution and Curation of Knowledge
Share on FacebookShare on TwitterShare via Email
Share
Book 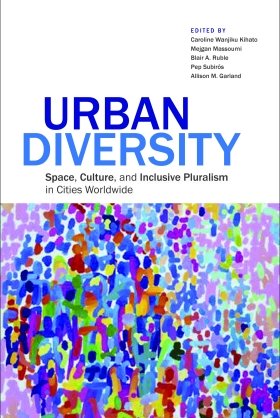 The contributors also explore the socioeconomic and cultural mechanisms that can encourage inclusive pluralism in the world’s cities, seeking approaches that view diversity as an asset rather than a threat. Exploring old and new public spaces, practices of marginalized urban dwellers, and actions of the state, the contributors to Urban Diversity assess the formation and reformation of processes of inclusion, whether through deliberate actions intended to rejuvenate democratic political institutions or the spontaneous reactions of city residents.

Caroline Wanjiku Kihato is a senior research fellow at the School of Architecture and Planning at the University of the Witwatersrand. Mejgan Massoumi is the manager and program coordinator for the Center for Middle Eastern Studies, University of California, Berkeley, and former project associate of the Comparative Urban Studies Program (CUSP) at the Woodrow Wilson Center. Blair A. Ruble is director of CUSP and director of the Kennan Institute.

“The book is original in its global comparative perspective. It captures the global problem of the ever-increasing size of cities and hence their sustainability.”—Caroline B. Brettell, Southern Methodist University

“This broad collection of ideas and solutions, data, and reflections should stimulate scholars and policy makers to reconsider their work while looking at other changing cities worldwide.”—Choice

“Complex and ambitious…. An ideal book for comparative urban studies class and a must read for any scholar or policy-maker interested in tackling the challenges of the Twenty-First century city.”—Deirdre A. Oakley, International Journal of Comparative Sociology