Washington's U Street: A Biography 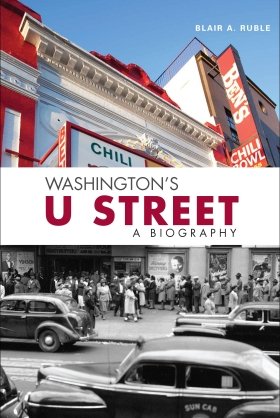 This book traces the history of the U Street neighborhood in Washington, D.C., from its Civil War–era origins to its recent gentrification.

Home throughout the years to important scholars, entertainers, and political figures, as well as to historically prominent African American institutions, Washington’s U Street neighborhood is a critical zone of contact between black and white America. Howard University and the Howard Theater are both located there; Duke Ellington grew up in the neighborhood; and diplomat Ralph Bunche, Supreme Court Justice Thurgood Marshall, and medical researcher Charles Drew were all members of the community.

This robustly diverse neighborhood included residents of different races and economic classes when it arose during the Civil War. Jim Crow laws came to the District after the Compromise of 1877, and segregation followed in the mid-1880s. Over the next century, U Street emerged as an energetic center of African American life in Washington. The mid-twentieth-century rise of cultural and educational institutions brought with it the establishment of African American middle and elite classes, ironically fostering biases within the black community. Later, with residential desegregation, many of the elites moved on and U Street entered decades of decline, suffered rioting in 1968, but has seen an initially fitful resurgence that has recently taken hold.

Blair A. Ruble is the author of several books about the governance of cities worldwide, including Creating Diversity Capital: Transnational Migrants in Montreal, Washington, and Kyiv and Second Metropolis: Pragmatic Pluralism in Gilded Age Chicago, Silver Age Moscow, and Meiji Osaka, both also published by Johns Hopkins and the Woodrow Wilson Center. Ruble is director of the Kennan Institute and of the Comparative Urban Studies Program at the Woodrow Wilson Center.

“In his erudite, and refreshing, historical study of one infamous Washington Street, Blair Ruble…ventures into foreign, scholarly terrain to probe the racial, class, and cultural strands that have molded U Street.… Ruble thoughtfully situates its historical development within the broader context of the ‘Secret City’s’ urban development and the convoluted milieu of southern race relations during the nineteenth and twentieth centuries.”—Matthew Smalarz, Maryland Historical Review

“Complete with personal profiles of past and present DC luminaries, known locally and nationally, in more than 300 pages of text Ruble takes the reader on a journey of U Street’s history from its initial development following the arrival of runaway slaves to the city during the Civil War to President Obama's visit to the landmark Ben’s Chili Bowl.”—John Muller, H-Net

“Straightforward tale about the District’s history with African Americans at the center.”—Baltimore Afro American

“[Ruble] weaves the historical tale of the area with profiles of its major personalities, including Howard University founder Maj. Gen. Oliver Otis Howard, former Mayor Marion Barry and Radio One Inc. founder Cathy Hughes…. After all, it’s a lot more than a place to get a half-smoke.”—Matthew Gilmore, Washington Business Journal

“This is a wonderful book… Washington’s U Street: A Biography is a meritorious study of a subject of considerable historical importance. Thank you, Mr. Ruble.”—Theodore Hudson, Ellingtonia

“A must-read for anyone interested in the tremendously rich history of the U Street neighborhood.”—14th & You

“Too often, historians forget that Washington, DC, is a city with a history and not just an extension of national politics. Ruble gives readers a history of U Street with a story of a neighborhood that began as a free black community.”—Choice

“Groundbreaking…. Ruble carefully constructs a biographical history of U Street in northwest Washington that highlights the accomplishments of everyday people in the neighborhood, while simultaneously giving life to the area’s buildings, streets, and educational and cultural institutions, particularly those of the African American community.”—Amber N. Wiley, H-DC, H-Net Reviews

“An informative, readable, and well-documented work that seeks to recover the history of the nation's capital from the vantage of its African American residents and one of their most enduring communities.”—David Taft Terry, Journal of American History

“No one, to my knowledge, has assembled a narrative on black Washington that covered such an expanse. There have been a number of books that have looked at black Washington during a certain era, but they do not attempt the sort of panoptic approach that one finds in Washington’s U Street.”—Jonathan Holloway, Yale University

“Ruble offers more than a mere chronology of the U Street neighborhood. Washington’s U Street: A Biography gives readers a glimpse into the lives of the people—rich and poor, black and white, law-abiding and not—who elevated U Street into the iconic place it is today for Washingtonians, especially African Americans.”—Mary Berger, Washington History

“A fine work that sheds light on race relations on U Street and throughout the District.”—Lopez D. Matthews Jr., Journal of African American History