Efforts to address climate change through mitigation and adaptation often fail to include analysis of the conflict or peacebuilding potential of such actions.

“What are the conflicts or risks associated with response to climate change?” asked ECSP Director Geoff Dabelko at the Wilson Center on July 18. “How we respond to climate change may or may not contribute to conflict,” he said, but “at the end of the day, we need to do no harm.”

Dabelko was joined by Christian Webersik, associate professor at the University of Agder, Norway, and Dennis Taenzler, senior project manager at adelphi, to discuss how responses to climate change may lead to new conflict. As we think about adopting biofuels, solar and nuclear energy options, and geoengineering, “we have to do it with our eyes open,” Dabelko said.

The Ripple Effects of Climate Change

We are “both the victims and agents” of climate change, Webersik said. We are affected by it, but we are also responding to it, through adaptation and mitigation efforts, geoengineering proposals, and emissions avoidance. “These strategies themselves have ripple-on effects,” he said. For example, the fuel-food crisis in 2008, in which higher demand for biofuels led to more competition over arable land and increases in food prices, contributed to riots and political instability in some places.

Webersik also touched on both the opportunities and risks of carbon capture and storage technology. Forty-five percent of carbon emissions in the United States come from coal, he said. Capturing CO2 from those plants could reduce emissions; however, “carbon capture needs to be close,” he said, which introduces the risk of these high-pressure facilities accidentally erupting (as happens naturally – and dangerously – in places like Lake Nyos, Cameroon). This underdeveloped and expensive technology has yet to be widely deployed.

Another climate mitigation strategy, nuclear energy expansion, poses not only accident risks but also conflict risks via the proliferation of nuclear information and fuel, said Webersik.

Forests as Cause for Conflict and Cooperation

Taenzler presented two divergent views on our world’s forests. On one hand, these remote and often disputed lands have been home to many clashes over resources, which are sometimes further fueled by timber revenues. On the other hand, forests also present “sustainable opportunities,” he said. “One-point-two billion people depend on forests for income and livelihood.” 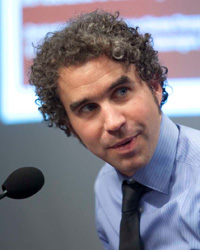 Managing these complex socioeconomic systems the right way is an important avenue for ensuring environmental sustainability. Taenzler stressed this facet of forest management, pointing to a World Bank figure that 20 percent of all greenhouse gas emissions come from deforestation and forest degradation.

REDD – Reducing Emissions from Deforestation and Forest Degradation – has been implemented by several institutions to stimulate action on forest management and provide payment for ecoservices. Since the 2007 UNFCCC meeting in Bali, REDD programs have been adopted by the World Bank, the UN, and Norway’s International Climate and Forest Initiative to help manage forest resources and prevent emissions. Specifically, the program develops assessment tools to measure carbon emissions and supports the indigenous people whose lives depend on the forest. Taenzler highlighted the many benefits of adopting a REDD strategy as the pathway for managing global forests, including “generating new opportunities for incomes, creating forest monitoring structures, building government institutions, and fostering cooperation as opposed to large-scale logging, mining, and exploitation.”

But Taenzler also addressed the potential negative effects of the program: “Further marginalization of forest-dwelling communities, increased corruption leading to unequal benefit sharing, and legal clashes stemming from unclear carbon ownership” are all possible risks from adopting REDD on a greater scale.

To minimize the conflict from climate change responses in the energy sector, Webersik called for a focus “away from corn and sugarcane” and on to second generation biofuels, such as algae grown in salt water and residue from the logging industry. He also stressed the need to experiment with carbon capture and storage and new energy efficiency techniques. “Climate change is a reality. Let’s get our focus back on adaptation and reducing the vulnerabilities in countries and increasing their resilience. This is also an opportunity to bring together the disaster community.”

Similarly, “there is a need for a conflict-sensitive approach when implementing REDD,” said Taenzler. “We need to focus on clarifying ownership and legal issues, installing transparent forms of benefit sharing, and ensuring international support for capacity building and REDD-readiness.”

“We need much greater fluency and cooperation across communities and disciplines, much greater flexibility in program design and communication across offices,” said Dabelko. “Back up at the 30,000 foot view, [we need to] avoid the hyperbole in either direction that either the sky is falling or that there is no problem at all, which can set back the policy discussion.”