Backdraft: The Conflict Potential of Climate Mitigation and Adaptation

Alexander Carius of adelphi, Cleo Paskal of Chatham House, Stacy VanDeveer of the University of New Hampshire, and Geoff Dabelko of ECSP discuss the unintended security consequences of climate mitigation and adaptation policies.

Backdraft: The Conflict Potential of Climate Mitigation and Adaptation

The European Union's biofuel goal for 2020 "is a good example of setting a target….without really thinking through [the] secondary, third, or fourth order consequences," said Alexander Carius, co-founder and managing director of Adelphi Research and Adelphi Consult. While the 2007-2008 global food crisis demonstrated that the growth of crops for fuels has "tremendous effects" in the developing world, analysis of these threats are underdeveloped and are not incorporated into climate change policies, he said.

At the recent Wilson Center event, "Backdraft: The Conflict Potential of Climate Mitigation and Adaptation," Carius was joined by Cleo Paskal of Chatham House, Stacy VanDeveer of the University of New Hampshire, and Geoff Dabelko of ECSP to discuss the unintended security consequences of climate change mitigation and adaptation strategies.

Giving the Green Light to REDD?

"Who owns the carbon rights?" Carius asked of the UN's Reducing Emissions from Deforestation and Forest Degradation program, or REDD. The program's design raises serious questions about governance, treatment of local communities, and resource access that must be resolved to avoid the risk of conflict.

In comparison with other forest resources, the issues surrounding REDD "are slightly different because [sequestered carbon] is not a product that can [physically] be traded," noted Carius. Still, VanDeveer warned that efforts to protect rainforests in the 1980s and 1990s morphed into "justification for states across parts of South America and parts of Asia to assert state control over people and land and territory for which the state did not actually have control." The result was "a lot of violence and a lot of rights reductions in huge parts of the rainforested world," he said.

From Oil to Rare Earths 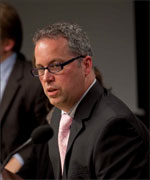 Mitigation efforts will reduce carbon emissions, but VanDeveer questioned whether we fully understand the consequences of doing so. "What are the implications for the existing petro states if we actually do bend the curve on carbon emissions?" he asked.

VanDeveer does not believe that the evidence supports New York Times columnist Tom Friedman's assertion that falling oil prices would undermine the authority of autocratic petro regimes and promote greater freedoms and democracy. If a fall in prices does generate such reforms, "it will be a historic surprise," he said.

The switch to new energy sources raise questions of its own. Many renewable energy technologies under discussion--from windmills to hybrid electric cars--depend upon one or more rare earth elements (REE), which are also parts of key military hardware.

An all-out commitment to technologies dependent on rare earth elements risks creating another foreign energy dependence for the United States that it is not prepared to handle. "We know China, for example, has been very active in securing these supplies for a very long time and see it in the context of general strategic security," Paskal said. The United States, on the other hand, has mainly examined REE supplies from a "commercial context," she said. 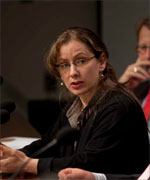 China's strategic perspective grants it a wider range of options for securing supplies and creates a "very uneven playing field," said Paskal. For example, China's relationship with Sudan is "a complete country-to-country package deal," she said. "They're not just exchanging oil, they're doing military training and infrastructure, and arms supply, and diplomatic cover."

Not Just Conflict, But Cooperation

Not all is dire, however, as new climate mitigation and adaptation strategies may also provide platforms for building cooperation. According to VanDeveer, one of the greatest opportunities could be the development of cross-boundary energy grids to balance intermittent renewable energy sources like solar or wind.

For example, the proposed Desertec project, which will link European markets with solar energy plants in North Africa, is scheduled to be operational within five years. In South Asia, Nepal and Bhutan's large hydroelectric potential could be developed to export power to energy-starved areas in China and India, said VanDeveer.

In addition, Carius noted that monitoring and verification systems like those envisioned under REDD can have a positive impact by helping to build "the necessary governance structures at the local level." Such benefits of adaptation strategies may offer a triple bottom line, improving not only adaptive capacity, but also fostering peacebuilding and development.

All of the panelists noted, however, that our understanding of the unintended consequences of climate change mitigation and adaptation strategies is only rudimentary and more research is needed. "The argument is not really to take a position saying this is good or bad," Carius said, but instead to call for a "careful assessment."

The panelists stressed that taking actions to mitigate and adapt to climate change is necessary, but that we must evaluate the full range of potential effects of these strategies. "We need to blow open the box on how complicated these problems are," Paskal said. "We need as many different people involved and as many different sorts of solutions as possible."

Drafted by Dan Asin and edited by Meaghan Parker.