What is it like to work like in Korea’s Demilitarized Zone (DMZ)? For decades, the United Nations Command Security Battalion (UNCSB) post in the Joint Security Area that divides Korea was a tense and volatile place referred to as “the world’s loneliest outpost.” Post-2018 diplomatic initiatives and newly-minted cooperation between UNCSB troops and their North Korean counterparts made the DMZ a far less forbidding border, yet recent months have brought renewed tensions to one of the world’s most-contested landscapes.

Lt . Col. Sean Morrow,  who served as the Commander of the UNCSB from 2018 until June of this year, has a unique perspective on the DMZ. As Morrow writes in an essay in the new issue of The Wilson Quarterly – “Bridges at Panmunjom” –  he played a key role in implementing diplomatic agreements to demilitarize the Joint Security Area over the past two years.

Watch the moderated discussion between Lt. Col. Morrow and longtime foreign correspondent Jean H. Lee, who as AP’s Pyongyang bureau chief made many trips to the DMZ from the North Korean side and now serves as director of the Wilson Center’s Korea Center.

“We don’t normally mark the beginning of a conflict, but as Congressman Harman mentioned, it’s been 70 years and there has not been an end to this particular conflict. We thought it was important to recognize this conflict because it has such a bearing on not only on what’s happening on the Korean Peninsula but in the region today.”

“We have so little information about North Korea, especially now when they’ve shut the borders. The North Korean state has such a tight hold [on information] and a very industrious propaganda machinery. They’re good about cultivating the images that we see of North Korea, but I think that just beyond that DMZ, that sort of theatrical set that North Koreans have created, for me coming from Pyongyang from the North side into the DMZ, you see the poverty that lies just outside that zone.”

“For people like my parents who survived the Korean War, often when I show them pictures of North Korea today, my mother would say that’s what it looked like in 1953. So much of it has not developed. Of course, that’s a huge contrast to South Korea, which as we know has the world’s twelfth largest economy, is so vibrant, and is such a leader in so many areas. It’s always a stark reminder when you’re dealing with the North Koreans, how different the two Koreas are in that sense.”

“When I took command, it was during a period of tremendous opportunity, where we were able to engage our counterparts from the KPA [Korean People’s Army of North Korea], really for the first time as a Security Battalion since 1976.”

“As we had more interaction, we saw them start to loosen up. They would ask questions about our families, but not in necessarily an intelligence gathering way … we talked about family. They would share, occasionally, a photograph of their family, talk about their aspirations for their sons to serve in the military, to serve the Chairman, but also to grow up to become engineers, or professors, or doctors. Just kind of the same things that any of us would want for our children”.

“They always, always made sure that we knew where their loyalties lie. There was no question that if we asked them something about the current situation we knew what side they were gonna come down on, and there was no, no hedging of that.”

“That’s when they [North Korean soldiers] made the comment that, you know, ‘you guys were different than we were taught you’d be.’ And to me that’s probably one of the most poignant moments in my two years there because it just, one, helped us realize what information and propaganda mean to a population, to a people. How hate and mistrust can be built and developed, but how something as simple as interaction can start, slowly, slowly, chip away at that.”

“I truly believed in some of the ways that they opened up: that they shared the stories of their children, that one old officer even said, ‘maybe someday our grandkids can play together.’ Those are powerful sentiments, and I think that, you know, we might’ve not have changed North Korea during these interactions in Panmunjom, but I think we definitely changed a few individual minds.”

Commander of the United Nations Command Security Battalion-Joint Security Area at the DMZ in South Korea. 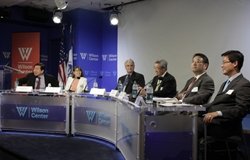 Article
Modern Korean History
Lasting Peace? - Prospects for Peace on the Korean Peninsula and the State of the ROK-U.S. Alliance 65 Years After the Armistice Agreement
October 15, 2018