A Briefing on the Niger Delta: Where Things Stand

Contrary to the deadly and deeply troubling situation in northern Nigeria and parts of the Middle Belt, ongoing insecurity, abductions, and politically-motivated violence in the oil-producing Niger Delta, a hotbed of unrest and instability just a few years ago, seems to be abating.

A Briefing on the Niger Delta: Where Things Stand

“It is critical to discuss what the Niger Delta is now, not what it was.” – The Honorable Kingsley Kuku

“I am talking to you not as a member of the federal government, but as a man who is from the Delta and participated in the struggle,” said The Honorable Kingsley Kuku, Special Advisor on Niger Delta Affairs to the President, to open the discussion.  Kuku called on the beleaguered parties to the conflict in the troubled region to look forward, rather than reflecting on past trials. He also asked them to note the correlation between how things have been dealt with in the Niger Delta and the North. He went on to discuss the issues of disenfranchised youth, human rights, and international involvement, as well as the Disarmament, Demobilization, and Reintegration (DDR) program.

Kingsley Kuku stressed that “the use of force in solving indigenous crises will not work in the end; It only leads to more fractionalization and conflict.” Instead, continuous dialogue and confidence building measures that engender mutual trust and understanding are potentially better means to diffuse the tensions in the Delta.  The heavy hand of the military may only exacerbate the situation.

In terms of leadership, Kuku stated that officials from the North need to be involved in the decision-making process going forward. “[We] cannot lose sight of the fundamental issues of human rights abuse when trying to stop insurgencies. [They] could end up committing worse atrocities than rebel groups.” Through the process of dialogue and community consultations held in the Niger Delta, subsequent factors have come to light i.e. the rise in environmental degradation, investment of oil revenues, and youth disenfranchisement. According to Kuku, security forces need to be held accountable for their crimes against the local population. This ought to be made a top priority by the Nigerian Government.

In 2009, the DDR program, an amnesty initiative, was launched in Nigeria. 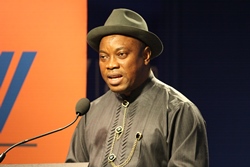 Kuku charged that DDR the world over ought to be homegrown and country-specific. This is one of the methods by which the Nigerian Government has attempted to pacify the rebels. Speaking in reference to the presence of international actors and stakeholders in the Delta, Kuku stated that “international intervention in this program will mess up ‘the image’ of the program.” He insisted that peace and security in the Niger Delta would be best served by international interests focusing on the incorporation and training of youth in technical support, education, and immigration. Further, he posited that young Nigerians with appropriate academic credentials should be allowed to come to the United States, Europe and Canada to study at institutions of higher learning.

Kuku repeatedly sang the praises of President Goodluck Jonathan’s attempt to grow and develop Nigeria. “[We are] one of the architects of the Niger Delta struggle, but also one of the actors in the peace process, and Goodluck Jonathan’s creation of and involvement in the Amnesty program has made it successful.” Kuku asserted that progress has been made in quelling the situation, stating that “the Niger Delta is calm now; there is relative peace.” 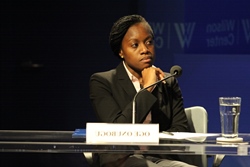 Drawing on Kuku’s final remarks, Oge Onubogu, Program Manager at the National Democratic Institute, discussed the need for the region to move from a “relative pause to sustainable peace.” In scrutinizing Kuku’s comments, Onubogu questioned whether the DDR program has, in effect, addressed the root causes of the conflict that made people take up arms in the first place. She stressed that the youth require significant attention, as there is “little opportunity for advancement and little job creation outside the oil sector.” Furthermore, relevant stakeholders should look toward fostering cooperation between the executive and legislative branches, civil society and the media. Finally, Onubogu, noted that it was plausible for the insurgency to resume after the Amnesty program ends, if careful and earnest attempts are not made to develop the Delta. She cautioned that if the root issues are left to fester and the aforementioned stakeholders fail to come together around a platform of long-term peace, security, and development, the Amnesty program may be just a Band-Aid on an open wound.