Skip to main content
Support
Explore More
Close
Article
Conflict Resolution and Peacebuilding
Conflict Resolution Practices, Skills & Orientations in the Indian Context
By Jyoti M. Pathania on May 21, 2020
Share on FacebookShare on TwitterShare via Email
Share
Part of the Resources for Peace
Event

Certification: The Path to Conflict-Free Minerals from Congo

The Woodrow Wilson Center's Africa Program in co-sponsorship with the Enough Project assembled a panel of experts from American, British and Congolese governments, private industry, and the non-governmental community to discuss the deplorable situation in eastern Democratic Republic of the Congo involving conflict minerals and the way forward.

Certification: The Path to Conflict-Free Minerals from Congo 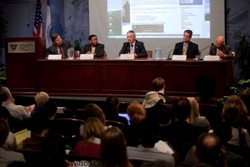 The Woodrow Wilson Center's Africa Program in co-sponsorship with the Enough Project assembled a panel of experts from American, British and Congolese governments, private industry, and the non-governmental community to discuss the deplorable situation in eastern Democratic Republic of the Congo involving conflict minerals and the way forward.

Under Secretary of State Robert D. Hormats, opened the discussion by lamenting that the humanitarian situation in the restive areas of eastern Democratic Republic of the Congo (DRC) were “extremely traumatic,” and arguing that it “therefore, [required] a bold, resolute, and morally inspired response by the United States and other countries.” 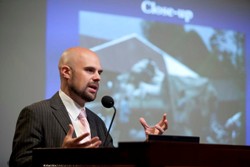 Sasha Lezhnev, Policy Consultant for the Enough Project, explained how the demand for tin, tantalum, tungsten and gold, for use in batteries, circuit boards and screens in computers and cellphones, are, in effect, driving the conflict in the DRC. He stated “if we want to have a lasting impact, we’re going to need a certification process” and that we must learn lessons from the Kimberley Process (KP) in order to implement a suitable framework in the DRC. Ambassador Faida M. Mitifu, of the DRC, pointed out that a consequential 70% of the economies in the eastern regions of the country depend on mining, thus any initiative would have to take into account the livelihoods of the people. Lezhnev called for development projects that assist those communities while a process is formulated to combat the illegal exploitation of minerals.

The Kimberley Process: A Potential Model? 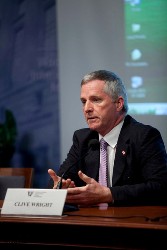 Clive Wright, who served as the Diplomatic Negotiator for the KP and Head of the Foreign Policy Team for the British High Commission in Ottawa, Canada, described the intricacies of the process and its genesis.  Under the provisions of the KP, the trade of rough diamonds is permissible, provided that there is a certificate from the country of origin and complementary legislation is in place in the importing country. This agreement was made through consultations and dialogue between the private sector and civil society. Though successful in certain respects, Wright listed several shortcomings; the KP is not legally binding, therefore there are no levers to pull that compel government action; the process is void of an independent monitoring mechanism; and the consensus clause inadvertently allows one government to block any action and that clears the way for the status quo to prevail.

To implement a policy similar to the KP that guarantees legitimate trade in the DRC, Under Secretary Hormats, highlighted four key actors that have critical roles independently and collaboratively: (1) regional governments, (2) industry, (3) civil society, and (4) the US government.

Hormats said that regional governments face considerable challenges as rebel groups trade across borders and evade efforts to reign in the commerce of precious gems, minerals, and arms. The sovereign states of the Great Lakes have coalesced around these complex issues and developed a plan that will require effective coordination to ensure credibility. Some countries have already established traceability schemes, which are crucial for states that share borders with the DRC, since incessant smuggling occurs. It is in the interest of neighbor countries to guarantee transparency and accountability, as companies are beginning to insist upon knowing the origin of the minerals. The government in Kinshasa has made significant steps toward a certification framework and taken punitive action against military personnel who have engaged in illicit trade. Nevertheless, governance and corruption represent a formidable roadblock in the implementation of any certification process.

Ambassador Mitifu outlined the efforts the Kabila administration has made to address the issue, including initiatives to put in place a credible certification system so that clean minerals can be exported.  With regard to rebel factions, Kinshasa has occasionally participated in joint operations with the governments of Rwanda and Uganda “to stabilize [and] contain the activities of armed groups.” Progress, though slow, has been made in demilitarizing the mining areas in the Kivu provinces as well as Maniema, and in weakening the Congrès National pour la Défense du Peuple’s (CNDP) parallel administration. With MONUSCO, the DRC has introduced centers where miners can bring their products and put them on an official supply chain. Finally, Kinshasa is working closely with the private sector, international organizations and local NGOs to minimize fraud and enhance cooperation. 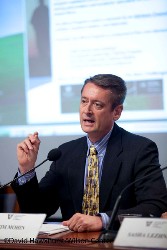 Tim Mohin, the Director of Corporate Responsibility for Advanced Micro Devices, argued that industry can positively influence the supply chain by creating conflict-free smelter programs and a due diligence bulwark where anyone along the supply chain can trace their resources back to a certified smelter. Customers, he stated, are going to have to insist that businesses comply with this tracking system. Under Secretary Hormats agreed with this sentiment, saying that companies that look into where the origin of their minerals send a powerful message to the region and the world. He also expressed hope “that companies [would] work to find ways to adhere to legislation [Dodd-Frank] and honor their obligations to their shareholders without shunning the region’s minerals entirely.” Despite the tracking system, the most difficult stretches along the supply chain are; getting buy-in from the miners and the smelters, industry overcoming the constraints of socio-economic realities and geo-politics, and the lack of infrastructure without US government assistance in the development of a sustainable system that spans the spectrum of the supply chain.  In addition to shored up US involvement, Mohin called for increased public-private sector partnerships with incentives reminiscent of the Fair Trade system, development aid to assist displaced people, and enhanced security for artisanal miners businesses.

Hormats commended the pivotal role civil society has played and must continue to play in highlighting the humanitarian issues at stake, as governments and companies have been only “dimly aware of the link between human rights abuses and the minerals trade.” Furthermore, Wright encouraged civil society’s participation because it serves as a “great policeman” that monitors the bad behavior of governments, especially when the allure of profiteering seeps into deliberations. Moving forward on the boosting of security for civil society on the ground in the Congo will be essential. 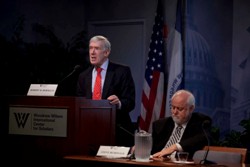 Hormats asserted, has to do its part to support initiatives on the table to create conflict-free supply chains of minerals. If more revenue is invested in legitimizing supply chains, a substantial portion of the problem would be solved. USAID and the State Department are working with civil society to take action against those responsible for illegitimate trade and exacerbating the conflict.  Of course there remains work to be done, but as Under Secretary Hormats indicated “this is the most significant moral issue of our time.”