Connections Between Climate and Stability: Lessons from Asia and Africa

Janani Vivekananda of International Alert was joined by Jeffrey Stark of the Foundation for Environmental Security and Sustainability and Cynthia Brady of USAID's Office of Conflict Management and Mitigation, to discuss the complex connections between climate change, conflict, stability, and governance.

"We, alongside this growing consensus of research institutes, analysts, and security agencies on both sides of the Atlantic, think of climate change as a risk multiplier; as something that will amplify existing social, political, and resource stressors," said Janani Vivekananda of International Alert.

Vivekananda, a senior climate policy officer with International Alert's Peacebuilding Program, was joined by co-presenter Jeffrey Stark, the director of research and studies at the Foundation for Environmental Security and Sustainability (FESS), and discussant Cynthia Brady, senior conflict advisor with USAID's Office of Conflict Management and Mitigation, to discuss the complex connections between climate change, conflict, stability, and governance.

Climate change and stability represent a "double-headed problem," said Vivekananda. Climate change, while never the only cause of conflict, can increase its risk in certain contexts. At the same time, "states which are affected by conflict will already have weakened social, economic, and political resilience, which will mean that these states and their governments will find it difficult to address the impacts of climate change on the lives of these communities," she said.

"In fragile states, the particular challenge is adapting the way we respond to climate change, bearing in mind the specific challenges of operating in a fragile context," said Vivekananda. Ill-informed intervention programs run the risk of doing more harm than good, she said.

For example, Vivekananda said an agrarian village she visited in Nepal was suffering from an acute water shortage and tried adapting by switching from rice to corn, which is a less water-intensive crop. However, this initiative failed because the villagers lacked the necessary technical knowledge and coordination to make their efforts successful in the long term, and in the short term this effort actually further reduced water supplies and exacerbated deforestation.

"Local responses will only be able to go so far without national-level coordination," Vivekananda said. What is needed is a "harmony" between so-called "top-down" and "bottom-up" initiatives. "Adapting to these challenges means adapting development assistance," she said.

"What we're finding is that the qualities that help a community, or a society, or in fact a government be resilient to climate change are in fact very similar qualities to that which makes a community able to deal with conflict issues without resorting to violence," said Vivekananda.

"The impacts of environmental change and management of natural resources are always embedded in a powerful web of social, economic, political, cultural, and historical factors," said Stark. "We shouldn't expect simple, surgical solutions to climate change challenges," he said.

Uganda and Ethiopia, for example, both have rich pastoralist traditions that are threatened by climate change. Increasing temperatures, drought, infrequent but intense rains, hail, and changes in seasonal patterns are threatening pasture lands and livelihoods. 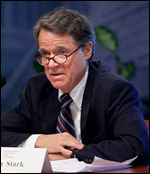 At the same time, pastoralists are confronting the effects of a rapidly growing population, expanding cultivation, forced migration, shrinking traditional grazing lands, anti-pastoralist attitudes, and ethnic tensions. As a result, "any intervention in relation to climate adaptation – whether for water, or food, or alternative livelihoods – has to be fully understood and explicitly acknowledged as mutually beneficial by all sides," Stark said. "If it is seen in any way to be favoring one group or another it will just cause conflict, so it is a very difficult and delicate situation."

Yet, the challenges of climate change, said Stark, can be used "as a way to involve people who feel marginalized, empower their participation...and at the same time address some of the drivers of conflict that exist in the country." 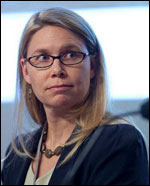 More in-depth case studies, such as the work funded by USAID and conducted by FESS in Uganda and Ethiopia, are needed to help fill the "missing middle" between broad, international climate change efforts – like those at the United Nations – and the community level, Brady said.

The information generated from these case studies is being eagerly awaited by USAID's partners in the Departments of State, Defense, and Treasury, said Brady. "We are all hopeful that there will be some really significant common lessons learned, and that at a minimum, we may draw some common understanding about what climate-sensitive parameters in fragile states might mean."

Foundation for Environmental Security and Sustainability