Ambassador Alice Wells will offer remarks on China’s Belt and Road Initiative (BRI) in South and Central Asia, with emphasis on BRI's Pakistan component, the China-Pakistan Economic Corridor (CPEC). Ambassador Wells, a top South Asia official at the State Department, will discuss CPEC’s implications for Pakistan’s development, and she will contrast the Chinese approach with the U.S. model for sustainable economic growth.

How does China’s Belt and Road Initiative compare with U.S. models for sustainable economic growth in Pakistan? Ambassador Alice Wells, Principal Deputy Assistant Secretary of State for South and Central Asia, examined the China-Pakistan Economic Corridor and its implications for Pakistan’s development.

“I think that today there is important debate that’s putatively over models of development, but it’s really about sovereignty and the freedom that nations can expect and that their citizens can enjoy. And America’s position really is unambiguous. Good governance, long-term capacity building, and market policies are the factors that enable the private sector to flourish that are essential for sustained development growth. Whether it’s Europe, Japan, Asian Tigers, India, the US approach to development has driven unprecedented economic expansion since the Second World War, lifting billions out of poverty.”

“As China’s largest investor, the United States has celebrated this remarkable result. China’s extreme poverty fell from 88.3 percent in 1981 to probably under 1 percent today, lifting more than 850 million people out of poverty. And as the Secretary said, we Americans indeed have a long cherished tradition of friendship with the Chinese people. But as we all know, or as we all should know, the Chinese Communist Party is not the same as the Chinese people.”

“What we see today is a Chinese Communist Party promoting its own brand of development: the One Belt One Road Initiative, or what President Xi has called: ‘A project of the century.’ Around the world, and certainly in my area of responsibility, South and Central Asia, we see Beijing pressing countries to sign OBOR (One Belt One Road) MoUs (Memorandum of Understanding), emphasizing peace, cooperation, openness, inclusiveness, mutual learning, and win-win cooperation. That sounds great. This vision is attractive for governments facing enormous development challenges and infrastructure needs. And we in the United States must welcome and do welcome any investment in trade that promotes sustainable, responsible development and growth. But after seeing OBOR in practice for the last few years, there are reasons to question the Chinese Communist Party’s largesse.”

“For example, China offers substantial financing, usually as loans. But Beijing is not a member of the Paris Club, and has never supported globally-recognized, transparent lending practices. According to an estimate released by the Keele Institute, Communist China is the world’s largest official creditor, lending over $5 trillion worldwide. But China does not publish, or even report, overall figures on its official lending. So neither rating agencies, nor the Paris Club, nor IMF are able to monitor those financial transactions. Chinese Communist Party officials recognize they need to use the language of openness and accountability, but the fact remains that the People’s Republic stands outside of global efforts, including those of the IMF and World Bank, to improve transparency that enhances policy making, prevents fiscal crises, and deters corruption.” 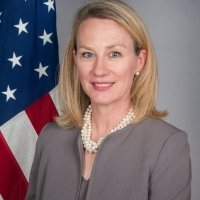 Public Policy Fellow;
Former Senior U.S. Diplomat and U.S. Ambassador in both South Asia and West Africa, with publications on both regions