A Conversation with Former Ukrainian Minister of Health Ulana Suprun

Dr. Ulana Suprun will discuss the future of Ukraine’s healthcare transformation and share lessons learned during her three years of work as Ukraine’s Minister of Health.

“In that three years, we had a law passed that created a National Health Service of Ukraine – a single payer system that provides for payment of services at the point of service.  There are, approximately, between 35-38 million Ukrainians – there hasn’t been a census in a very long time, but that’s the estimate that’s given by the Ministry of Finance – and in the first year of the healthcare reform which started in April 2018 […] 28 million Ukrainians signed up to the healthcare system."

“In private business, you’re talking about your own company and your own employees, whereas in government you’re talking about – in Ukraine – 38 million people.  So if you make a mistake, if you go too fast because you don’t go through all the proper channels of checks and balances, you could negatively impact the health and wellbeing of 38 million people. Therefore, there are certain procedures in government to stop you from doing that, and they are there for a reason.”

“We were the only ministry that actually transformed our entire ministry […] we brought in 80% new people into the directorates […] we brought in people from business, from the academic community, from the NGO community. The director of our directorate on strategic planning and Euro-integration was the head of the largest charity organization that helped children with cancer; the person who is the head of our public health center used to be the executive director of the network of people who live with HIV; The person who’s the head of the National Health Service of Ukraine used to be the CEO of one of one of the best and largest private hospital systems in Ukraine.”

“My Facebook page became a media outlet: so I would write a post on my Facebook page and they would read it on all of the television stations, and publish it on all of the media outlets. […] One of the things that is most popular on my Facebook page is the ‘busting of myths’ […] we started busting myths of Soviet medicine, and the first one we did was busting the myth that you cannot wet your TB test that goes under the skin on your arm […] In the Soviet Union, and in Ukraine, they wouldn’t let the kids wet their arm for five days […] People still come up to me on the streets of Kyiv and thank me for that post.” 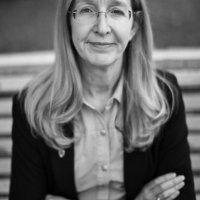