A Conversation with His Excellency Gebran Bassil, Minister of Foreign Affairs and Emigrants, The Republic of Lebanon

The Middle East Program at the Wilson Center and Safadi Foundation USA present the launch of the Lebanon Ideas Forum: "A Conversation with His Excellency Gebran Bassil, Minister of Foreign Affairs and Emigrants, The Republic of Lebanon"

Tuesday
3:00pm – 4:00pm ET
Get Directions
This event will be webcast live
Live stream will begin in approximately —:—:—

His Excellency Gebran Bassil, the Minister of Foreign Affairs and Emigrants of the Republic of Lebanon, discussed the policy challenges and opportunities facing Lebanon given its critical geographic location in the Middle East.

On March 21, 2017 the Middle East Program and Safadi Foundation USA hosted the inaugural event in the Lebanon Ideas Forum series, “A Conversation with His Excellency Gebran Bassil.” The Honorable Jane Harman, Director, President, and CEO at the Wilson Center, delivered introductory remarks and Lara Alameh, Board President and CEO of the Safadi Foundation USA, delivered welcoming remarks. Henri J. Barkey, Director of the Middle East Program at the Wilson Center, moderated the discussion.

Bassil opened the conversation by emphasizing the role Lebanon plays in the fight against ISIS. Apart from its military efforts on the Lebanese-Syrian border, Bassil referred to his country’s judicial and ideological contributions to combat the terrorist group; he cited Lebanon’s support for international judicial cooperation to hold ISIS accountable for their atrocities in Mosul as an example. Bassil also emphasized the peaceful coexistence of different faith groups in his country, which stands in stark opposition to ISIS’s monotheistic views. However, while the international coalition managed to regain some territory from ISIS in Iraq and Syria, looking at places like Yemen and Indonesia, the Minister cautioned that the coalition is still far from “achieving the eradication of Da’esh.”

Bassil also talked about displacement and emphasized that Lebanon has the highest quantity of refugees per capita and per square footage in the world. Due to the unprecedented numbers of Syrian and Palestinian refugees in Lebanon, the Minister referred to a variety of new challenges that arose in recent years, including the registration of the forcibly displaced as well as security concerns. According to Bassil, refugees are more frequently targeted by terrorist recruiters and more vulnerable to extremist ideologies due to their plight. At the same time, the movement of populations changed the social fabric of Syria; the moderate elements within the country are pouring out and foreign fighters are pouring in, which allows ISIS to claim even more space. Bassil argued the conflict in Syria needs to be resolved politically with the goal of a “united and secular Syria” that is politically stable and can cope with its religious diversity. He drew on lessons from Lebanon’s own civil war and warned of the perpetuating effects of foreign interference. He therefore advised the parties in Syria to cooperate within an internally-led process towards a power-sharing agreement.

Lastly, speaking about Lebanon’s security environment more broadly, Bassil highlighted the country’s two major challenges as being the ongoing tensions with neighboring Israel and terrorism. He pointed at Lebanon’s defensive strategy with regard to the conflict with Israel, which engages all parts of Lebanese society, including Hezbollah. Addressing the issue of terrorism, Bassil emphasized the need to strengthen the Lebanese Armed Forces, which so far managed to fight terrorism comparatively well given its limited size and resources. He further declined to comment on Hezbollah’s close ties to Iran and denied the government’s responsibility for the group’s actions beyond Lebanon’s borders and Syria, for example in Iraq and Yemen.

In the Q&A portion of the event, the Minister answered a question on Lebanese national Nizar Zakka, who is imprisoned in Iran since 2015, by referring to his office’s “ongoing effort” for his release. Bassil further discussed his expectations for U.S. military assistance to Lebanon under the new administration and laid out the mutual benefits of ongoing U.S. support in the fight against ISIS. He further spoke about long-term solutions for Syrian refugees in Lebanon as well as globally. He dismissed refugee resettlement as an effective solution due to the very limited number of people in those programs, and alternatively emphasized refugee return and assistance in the home country as only viable option.

This event is being presented as part of the Lebanon Ideas Forum, a partnership between the Middle East Program at the Wilson Center and Safadi Foundation USA.

Minister of Foreign Affairs and Emigrants, The Republic of Lebanon

President of the Board and CEO, Safadi Foundation USA 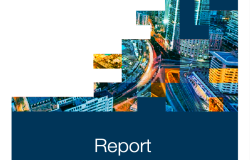