Skip to main content
Support
Explore More
Close
Event
Economics and Globalization
The Aftermath of President Bolsonaro's Visit to Washington and Prospects for Economic Reform
On Wednesday, March 20, 2019 at 2:30 – 5:00 ET
Share on FacebookShare on TwitterShare via Email
Share
Share
Email
Watch Now
Part of the Democracy and the Rule of Law
Event

A Conversation with His Excellency Hamilton Mourão, Vice President of the Republic of Brazil

The Brazil Institute was honored to host Vice President Mourão of Brazil at the Wilson Center, for a conversation on the political outlook for Brazil in the coming year and beyond.

The first 100 days of the Bolsonaro administration have been marked by political paralysis, in large part due to the successive crises generated by the President’s own inner circle, if not by himself. Amidst the political noise, Vice President Hamilton Mourão has emerged as a voice of reason and moderation, capable of providing direction in domestic and foreign affairs alike. Vice President Mourão has taken over management of the crisis in Venezuela and has been increasingly sought after by officials from China, Europe, and the Middle East, as well as the business community, to act as an interlocutor for the government. The former four-star general has also become a favorite of Brazilian journalists—who are frequently critical of the new administration—for his willingness to engage with the media and for his important remarks on the need for government to value a diversity of opinions.

“We are committed to restoring the confidence in the country and in its institutions so we can resume the path to our social and economic development. From the outset, our government has taken steps toward reform of the State: We reduced the number of ministries, appointing a cabinet without political influence, far from the practice that sold the government to political parties. We have also cut more than twenty thousand positions in different levels of the federal government, the so-called ‘commissioned positions’, which are open for non-career appointments, and therefore were part of the give and take game of old politics.”

“The armed forces will keep as they are, and as they have been in the last 34 years since the end of the military regime in Brazil in 1985. We have received the task from the Brazilian people to run the government for the next four years and to do our best, our big efforts, to change the course of action that Brazil was taking and to restore our economy and to restore the security of our people and to put the country back on its tracks so that we can reach sustainable development.”

"We have to do all that is in our hands to press the Maduro government to call new elections, to get out. And, okay, they don’t have the capacity to solve what is happening there. The country is shattered economically, the population is suffering because they don’t have access to food, they don’t have access to medicines. The problem now of electric power has reached the point of no return… What can we do? It is what we are doing through the Group of Lima. We have to apply [political and economic] pressure… The political pressure is being applied since the moment that we did not recognize anymore Maduro as the real government in Venezuela. And the economic pressure… the great pressure comes from the U.S.”

“…There is no question about the change [in climate], it’s changed. In Rio, any rain is a big problem. By the typography of the city, by the disorganization of and occupation of the city, so we have to deal with this. Of course, at first there was all that talk about the Paris Agreement, okay, we are going to stay in the Paris Agreement, we have to fulfill the Paris Agreement, and I think that we in Brazil can pass a good word to everybody once we do our homework on this problem of sustainability and the environmental question. Also I look forward, because there is going to be a market for carbon credits in the nearby future. Well, we will have a lot of carbon credits to sell.”

The Brazil Institute was honored to welcome Vice President Mourão at the Wilson Center on April 9, for a conversation on the political outlook for Brazil in the coming year and beyond. 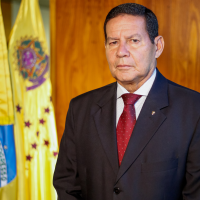 Vice President of the Republic of Brazil
Read More

Publication
Democracy
We Are Committed to Restoring Confidence in Brazil and Its Institutions: Vice President Hamilton Mourão's Remarks at the Wilson Center
By Brazil Institute