A Conversation with President Laurentino Cortizo of Panama

President Laurentino Cortizo had less than a year in office before COVID-19 upended his administration’s agenda. The country has since recorded more than 366,000 coronavirus cases and over 6,200 deaths. The economic toll has been severe. In 2020, Panama’s economy contracted by 18 percent, one of the worst recessions in Latin America. The pandemic’s second wave has caused further disruptions.

Cortizo, whose Partido Revolucionario Democrático holds a congressional majority, is promoting a 125-point economic recovery plan. The strategy leans heavily on public works: Panama will spend $7.7 billion on infrastructure this year, including an expansion of the Tocumen International Airport and a $2.8 billion, 21-mile monorail in Panama City that will tunnel under the Panama Canal.

Economic recovery, however, is not the only challenge Cortizo will confront during the rest of his five-year term. Panama has seen an explosion of migrants, many of them children, crossing the Darien wilderness from Colombia. It is also struggling with the impacts of climate change, including droughts that disrupt canal operations and sea-level rise displacing Kuna communities on islands off Panama’s Caribbean coast.

“We have an economic recovery plan that has 5 pillars. We cannot talk about economic recovery if we do not have a good vaccination strategy […] that’s the base of that. We do have programs for small, medium-sized enterprises. We have infrastructure projects that generate quite a lot of employment. We have also section 4 of that economic recovery plan, some resources for our financial sector, and the bigger economic activities, for example construction. And the last one—number 5—is related to the attraction of foreign direct investment. In that issue we do have new laws.”

“[Climate change] does really worry us—we think we are doing our part, but I have to be really frank with you, I think there are other big countries that they are talking a lot, but they are doing very little. And I hope that with President Biden and his leadership we could have a world that acts, and talks less, because climate change is a real, huge issue.”

“It worries us because we have been seeing every year the impact of the drought on the Panama Canal—right now the level of the Panama Canal is very good, but about a year ago it was not that good.”

“The relationship with the US is a very good relationship. It is a strategic relationship—obviously—and operational. We have been doing—with Colombia and the U.S.—not only dealing with the migration issue but also other issues, for example money laundering, organized crime. As of the first four months of this year, we have captured over 14 tons more of drugs than last year, and last year was a historic year.” 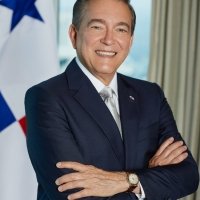