The Sultan reflected on key issues affecting Nigeria including Nigeria’s place in the Muslim world, religious tolerance and Christian-Muslim relations in Nigeria, his work and advocacy for the empowerment girls and women in Muslim-majority Northern Nigeria, the fight against Boko Haram, and his views on the prospects for Nigeria’s future.

On July 26, 2016, the Wilson Center Africa Program, in partnership with the International Interfaith Peace Corps and the U.S. Agency for International Development, was honored to host His Royal Eminence Alhaji Muhammad Sa’ad Abubakar III, the 20th Sultan of Sokoto. The Sultan – the spiritual leader of the Muslim community in Nigeria (and millions more in the sub-region), a revered leader in Northern Nigeria, and a highly regarded figure in the country – reflected on key issues affecting Nigeria including Nigeria’s place in the Muslim world, religious tolerance and Christian-Muslim relations in Nigeria, his work and advocacy for the empowerment girls and women in Muslim-majority Northern Nigeria, the fight against Boko Haram, and his views on the prospects for Nigeria’s future.

Following welcome remarks on behalf of the Wilson Center by Dr. Andrew Selee, Executive Vice President of the Wilson Center, Dr. Monde Muyangwa, Director of the Wilson Center Africa Program, offered brief remarks outlining the context and importance of the discussion. A leader on the African continent and in the world, Nigeria has experienced many successes. However, the country faces serious issues including ethno-religious tensions; inequality, particularly in parts of the north; violence, including a multi-year conflict with the terrorist group Boko Haram; and issues of women’s empowerment.

The conversation with His Eminence the Sultan of Sokoto offered a special opportunity to hear from one of Africa’s leaders on peace, development, religion, and interfaith tolerance in a time of raging and often polarizing debate about such issues and the interface between Islam and terrorism. His Eminence began with a discussion of Nigeria’s place in the Muslim world. As the most populous black nation in the world and one of the most populous Muslim countries (with 85-90 million Muslims), the religious leadership of Nigeria commands an important role in the greater Muslim world.

Moving the discussion toward religious intolerance, His Eminence posed several questions: Why is there such severe religious intolerance? Why is there so much violence around the world in the name of religion? How do we defeat the few among us who decide to take people’s lives in the name of religion, be it Christianity or Islam?

Simple skirmishes exacerbated by religious affiliation have created a worrying situation on the ground in Nigeria, he noted. Cross-religious engagement and dialogue, however, offer the solution to intolerance, providing options for religious leaders and everyday citizens to combat this issue. His Eminence encouraged Nigerians who practice the Islamic faith to read and understand their scripture, stressing that Islam abhors the killing of individuals. Creating peace and stability within a nation and living peacefully beside one another requires understanding, founded in trust, collaboration, and discussion. Multi-sectoral movements and organizations, such as the Nigeria Inter-Religious Council (NIREC), which His Eminence and the Catholic Archbishop of Abuja John Onaiyekan co-chair, and the Nigeria Inter-Faith Action Association (NIFAA);  bring together both Christian and Muslim religious communities on issues such as combatting disease and poverty and offer a platform for establishing trust. For example, he said, the NIFAA is working in partnership with the United States’ Center for Interfaith Action (CIFA) to eradicate malaria across the country. Mosquitos have no religion, he quipped, and so are a common enemy.

His Eminence then discussed the issue of leadership and politics and the often troubling consequences resulting from merging the two. The electorate is not comprised of Christian and Muslim votes, he noted, and citizens should avoid voting based on their religious sentiments. It is also important to understand that religious leaders also often function as traditional leaders in Nigerian society, often holding greater legitimacy in the eyes of the citizenry than political institutions. It is important, therefore, that these leaders put together organizations that reach out to the common man, while also serving to advise the government.

Turning to the topic of education, His Eminence stressed that education is the most important thing to give any child, whether a girl or a boy, and stated that the caliphate itself was founded on knowledge. Referencing the Sultanate Council’s plans to establish an all-women’s medical university in Northern Nigeria, His Eminence declared his full support for women’s education, outlining barriers to female education such as poverty and cultural norms. There is nothing in Muslim scripture that says girls should not go to school, he said.

Reflecting on Boko Haram, His Eminence stressed the misperceptions and misinformation that frequently surround the terrorist group. He argued Boko Haram is not part of a plan to eradicate Nigerian Christians, noting that more Muslims than Christians have died at the hands of Boko Haram fighters. People are angry about corruption and government failure, and when their voices were stifled, many turned to radicalization and violence. In recent months, however, Boko Haram has seen defeats at the hands of the increased force of the Nigerian. The actions of a few do not represent those of the majority, he reiterated, and it is these misperceptions that often lead to violence. In order to defeat an enemy, His Eminence noted, you must know them. And in order to love your neighbor, you must understand your neighbor.

His Eminence concluded his remarks by discussing the broader notion of division, stating that the more division one creates, the more problems one creates for oneself. Leaders must listen to those they are leading, he said, and try their best to unite, rather than divide, their followers. It is through dialogue that we can listen, learn, and ultimately solve problems together.

The event was hosted in partnership with the United States Agency for International Development (USAID) and the International Interfaith Peace Corps (IIPC). It was livestreamed and livetweeted. Follow the Africa Program Twitter account @AfricaUpCloseand catch up on the conversation with the hashtag #SultanofSokoto. 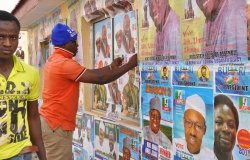 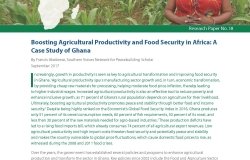 Publication
Food and Agriculture
Budgeting for Productivity and Food Security: How Smart Public Spending Can Boost Agricultural Productivity in Ghana 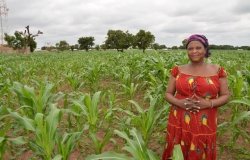