Covering Climate: What's Population Got to Do With It?

"Thinking about population and trends in population is a vital reality check for assessing policies you hear about on global warming," says New York Times reporter Andrew Revkin. Nevertheless, the mainstream media has been reluctant to write about population growth in relation to climate change.

Wednesday
3:00pm – 5:00pm ET
This event will be webcast live
Live stream will begin in approximately —:—:— 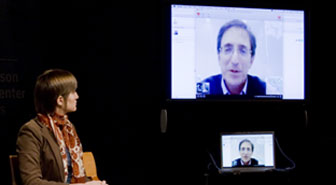 "There's a correlation between CO2 and population. And it's that we live in a world of more people, more money and more things, and that all distills down to the need for more energy," said Dennis Dimick, executive editor of National Geographic, at a Wilson Center event on the media's coverage of climate change and population.

"Thinking about population and trends in population is a vital reality check for assessing policies you hear about on global warming," said New York Times reporter Andrew Revkin, who joined Dimick and Nation Web Editor Emily Douglas via video conference. "When you start to think about that number—nine billion—a lot of cheery suppositions or assertions you've heard about how we're going to de-carbonize the world without too much effort…[get] challenged in a hurry," he said.

The Inconvenient Truth of Population

Despite these strong connections, the mainstream media has been reluctant to write about population growth, which Revkin called the "ultimate incremental story."
"We, I think, are guilty to some extent, in the media, of not paying adequate attention to this part of the whole issue," he said, partly because there is the perception that "we kind of solved that problem. But, again, just run those numbers: Nine billion people does not solve the climate problem and it has to be considered in every stage of assessing solutions to the climate problem."

"We need to talk about it so we understand this issue at a level beyond more people means more emissions," said Douglas. Other factors like levels of consumption, urbanization, and household structure make the population-emissions relationship complex and difficult to explain.

Revkin added that "consumption is even a tougher story to get at in print, because we're a medium that advertises consumption, among other things."

One-quarter of the world's population lacks access to electricity. "We are in this sort of double-vise, trying to constrain our own [energy] demand while also trying to provide the opportunities for people who have little to none," said Dimick.

With fossil fuels currently providing 80 percent of global energy, and with energy demand estimated to increase dramatically to meet the needs of 2.3 billion more people by 2050, the "scale of the challenge before us . . . is immense," he said. "To think that we're somehow simply going to go to solar and wind—I think we're deluding ourselves."

Douglas, who previously edited the RH Reality Check blog, emphasized that population issues go far beyond climate change. "I'm encouraging us to look at population not only from the perspective of the environment, but also from the perspective of individual women and their human rights, their right to determine the number and spacing of their children, and not purely to depress fertility rates in service of mitigating climate change," she said. 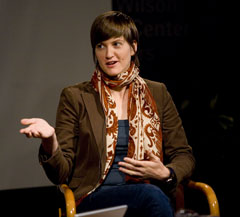 According to Douglas, each year 60 million pregnancies—one-third of the global total—are unintended, and 200 million women worldwide have an unmet need for contraception. Family planning programs are "cheap to employ and deploy, and women and societies want them anyway," said Douglas. A few recent studies have argued that universal access to family planning could be one of the most cost-effective ways to reduce greenhouse gas emissions.

And not just mitigation, but adaptation as well: "Women with access to reproductive health services are healthier and they're better able to deal with the impacts of climate change," she said. "Poorer countries are going to need adaptation strategies, and one of those strategies is to allow women to better determine the size of their families."

However, "many political leaders–not only on the right—don't like reproductive health programs," said Douglas. Disagreements over abortion and birth control are part of the problem, as well as past instances of coercive contraceptive methods in some developing countries.

Douglas cited a Population Action International survey that "found that 41 countries identified population growth as a factor that makes them more vulnerable to climate change, but only two of those countries proposed programs that address reproductive health."

Douglas decried the "significant gap between political leaders' understanding that population growth makes it more difficult for them to respond to climate change, and political leaders being able to muster the political will that will empower women to better control their own fertility."

Close-Up on the Most Vulnerable

Revkin urged reporters to use a "close-up lens" when examining population trends impact on climate—especially in "areas of the world where there are significant risks that could be amplified by human-driven climate change, like urban severe flooding and severe rains, like we saw in Manila recently."

With rapid urbanization in the developing world, "you have to look at places where you have hugely increased numbers of people moving essentially into harm's way—or being born in harm's way, if you're talking about sub-Saharan Africa," said Revkin.

"What if the whole world were equal in emissions?" Revkin asked. Suppose advanced industrial countries, such as the United States, reduce their annual emissions intensity from 20 tons of CO2 per person to 10 tons. At the same time, suppose rapidly developing countries, such as India, reach the same emissions intensity. In a world with nine billion people that equates to 90 billion tons—"three times today's current annual emissions of CO2," he said.

"Probably the single most concrete and substantive thing a young American could to do to lower a carbon footprint is not turning of the lights or driving a Prius, but having fewer children," said Revkin. "Eventually, should you get credit—if we're going to become carbon-centric—for having a one child family when you could've had two or three? Obviously it's just a thought experiment, but it raises some interesting questions."

Drafted by Daniel Asin and edited by Meaghan Parker.