A village in India fights the construction of a giant dam that threatens to flood it. ECSP Director Geoff Dabelko and Professor Ken Conca from the University of Maryland discuss.

The 2004 Environmental Film Festival in the Nation's Capital and the Wilson Center's Environmental Change and Security Project cosponsored a screening of Spanner Films' Drowned Out, about a village in India fighting the construction of a giant dam that threatens to flood it. After the film, ECSP Director Geoffrey Dabelko and Professor Ken Conca from the University of Maryland discussed the impact of dams on individuals and communities.

Drowned Out sees the world through the eyes of Luhariya, a healer in an Adivasi (indigenous) community on the banks of the Narmada River in Madhya Pradesh, India. His ancestors have lived in Jalsindhi for twelve generations and the river is sacred to him and his fellow villagers (while a bath in the Ganges can purify you, it only takes one look at the Narmada). If built, the massive Sardar Sarovar Dam project will irrevocably change his life and his community, by submerging the village and forcing its residents to migrate to cities or resettlement areas.

India has based its development strategy on such projects; for example, Nehru called large dams the "temples of modern India." The keystone of an enormous public works project, Sardar Sarovar is the largest of 3,000 dams planned to harness the water of the Narmada for millions of people in drought-prone areas of Gujarat and Rajasthan. Gujarat's Minister for Irrigation justifies disrupting the lives of those relocated by the project by saying, "If you have to sacrifice a little bit of your own to help society, do it gladly, willingly, smilingly."

The inhabitants of Jalsindhi have to choose between three unpleasant alternatives: relocate to a resettlement site, accept cash compensation and move to the city, or stay in the village and drown when the next monsoon causes the partially dammed river to flood its banks. Luhariya visits the resettlement camp and discovers that the land is too poor to farm, and the cash compensation is not enough to survive in the city. Migrants from other projects are impoverished and living in slums, a far cry from the self-sufficient life in the fertile area next to the river. The villagers decide to remain in Jalsindhi, preferring death to the alternatives. "We will drown, but we will not move," says Luhariya. His wife Bulgi, watching her children play, murmurs, "Of course we feel like crying. Who would feel like laughing?"

The Narmada Bachao Andolan (Save the Narmada Movement) led by Medha Patkar, fights to save the river and the villagers' way of life. Their plight also captures the attention of Booker prize-winning author Arundhati Roy, who says that "this is the heart of politics, this is the story of modern India." She explains that the water collected by the dam is unlikely to ease the drought-stricken people to the north, but instead will be diverted to provide water for the growing industrial sector and urban consumers. "There is a lot of money in poverty," she notes.

The struggle eventually forms what the film calls the biggest people's movement in India since the fight for independence in 1947. For three years, director Fanny Armstrong and her colleagues filmed the villagers through clashes with the police, Supreme Court appeals, and hunger strikes. The film ends in 2001, as the Supreme Court allows construction to resume and the Jalsindhi villagers prepare to once again face another monsoon season and the rising waters.

Professor Ken Conca of the University of Maryland and ECSP's Geoffrey Dabelko led an animated discussion on the social, environmental, and political impacts of dams. Conca, the author of a forthcoming book on transnational water issues, pointed out that Jalsindhi was not an isolated case. According to the World Commission on Dams , 40-80 million people worldwide have been displaced by the construction of large dams. Conca stressed the need to thoroughly assess a project prior to construction. In many cases, financial assessments of large projects are very sensitive to the assumptions made by analysts, and project planners often do not pay enough attention to environmental and social impacts. 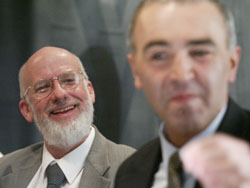 In response to a question from the audience, Conca agreed that the World Bank was more likely to finance large-scale infrastructure than smaller projects that integrate community-based solutions, but he warned against demonizing the Bank's role in the Narmada case. As presented in the movie, the Bank created an independent panel to investigate the protesters' claims, and ultimately withdrew its funding for the project.

Conca also pointed out that, as in the film, indigenous people or local communities are typically not consulted or kept informed. He noted that there were "hundreds of other Jalsindhis" that had not received public attention. However, the World Commission on Dams provides documentation on other cases, which can be found at the website www.dams.org.

Another audience member commented that it seemed as if the government was building the dam to benefit the middle class urban population at the expense of the rural poor. Conca responded that big dams are often international projects that "don't plug into the local economy." For instance, some dams in the Amazon were built to produce hydroelectricity to make aluminum for the world market. While the middle class indirectly benefited, global economic forces shaped the project. Conca also noted that dams often support industrial-level agriculture, so he was reluctant to generalize.

According to Franny Armstrong, the film's director, "Luhariya's house was submerged last July. The village made the family a new house further up the hill, but that too will be submerged (along with the rest of the village) in the next 2 or 3 years, depending on how fast the dam is built."