"Conflict-affected countries have some of the worst reproductive health indicators. Pregnant women may deliver on the roadside or in makeshift shelters, no longer able to access whatever delivery plans they had. People fleeing their homes may have forgotten or left behind condoms and birth control methods," said Saundra Krause of the Women's Refugee Commission at a recent Wilson Center event, "Family Planning in Fragile States." Yet supplying sexual and reproductive health services is often an afterthought in the rebuilding or post-conflict period.

Nigeria has one of the highest rates of maternal mortality in the world. In the northwest state of Sokoto, where Dr. Tunau works at Usmanu Hospital, maternal death rates in 2005 were three times higher than in the rest of the country. Through an innovative financial scheme, the Sokoto region reduced maternal death rates by half in just four years.

"We set up an emergency fund that would pay for the care of any woman who came to our center during pregnancy and labor," said Dr. Tunau. "Our emergency fund enabled us to quickly and efficiently provide obstetric care immediately when someone arrives at our institution."

Access to commodities such as birth control pills, condoms, and injectable methods (e.g., Depo-Provera) are typically secured through Nigeria's Ministry of Health. However, "many months have gone by and we have not received any contraceptives from them," said Dr. Tunau. "When contraceptives are not available it discourages our clients from returning to our clinic and creates a negative image within the community."

To resolve this issue, Dr. Tunau established a fund that purchases supplies directly from vendors when the Ministry of Health cannot provide them. But "unfortunately this is much more expensive and requires many more resources," she said.

Dr. Tunau encouraged funders to support the "provision and promotion of contraceptive use directly with remote centers like [Sokoto] in order to reduce bureaucracy." In the primarily Muslim parts of Nigeria, "one of the simplest and most important ways to improve reproductive health is to invest in female empowerment and education. An educated woman is an empowered woman," she concluded.

"War or no war, my line of duty requires that we are there for the ones who need reproductive health services. In fact, the conflict situation has made these services even more crucial," said Dr. Malick, who is the director of advocacy for Pakistan's Rahnuma Family Planning Association.

"Mothers die because there are no services for the poor, because the women are victims of brutal customs…because women are not valued; because women are not educated; they don't have freedom of mobility, decision making power; no control over their bodies. Women's lives are valued so low that in villages you will find men who are willing to spend money on their livestock but not on their wives," said Dr. Malick.

According to Dr. Malick, more than 52 million people in Pakistan want contraception but do not currently have access to it. "Pakistan is the world's sixth most populous country and will slip further down sooner than predicted if contraceptive security is not ensured," she said.

Compounding these challenges are the hundreds of internally displaced people leaving the Swat valley. "Their situation does not stop the process of childbirth," said Dr. Malick. "If we are not ready to deal with the emergency situation arising from the internally displaced people due to conflict, the maternal mortality statistics will further regress."

"The problems are enormous but not insurmountable," said Dr. Malick. Her pioneering organization, Rahnuma Family Planning Association of Pakistan, brings mobile health clinics to villages that do not readily have access to maternal health care. Its programs target youth and highlight the importance of integrating adolescent services, since "60 percent of the entire population is below the age of 29, and these young people are ready for change," she said.

Advocating for Improved Status of Women in Chad

Chad has witnessed civil conflict and political instability since 1968, and in this perpetual fragile condition, "reproductive health services are not a priority," said Dr. Kodindo, who is currently a professor at Columbia University. Over 280,000 refugees from Darfur and 170,000 internationally displaced persons add to Chad's burden, and the lack of skilled birth attendants and contraceptive security in remote areas contribute to the high child and maternal mortality rates.

"Chad is a pro-natalist country…and in the beginning the government was so afraid of using the term family planning because to them it was linked with family limitation, so they preferred to use [the term] family well-being," said Dr. Kodindo. Cultural traditions in Chad permit contraception use for birth spacing but not as a way to prevent unwanted pregnancies and emergency obstetric complications. "The status of women used to be valued by the number of children you have–-especially boys–-the more [children] you have, the more you are valued in the family," she said. However, these cultural practices are changing.

Funds for reproductive and maternal health care in Chad are limited and primarily provided by the United Nations Population Fund. Funding from other donor agencies, such as USAID, is essential to empowering women in fragile countries because it demonstrates to the host government "that a woman's life and health is important… and should be made a priority," said Dr. Kodindo.

Stabilizing and rebuilding Chad will require diverse donor support and the prioritization and integration of family planning within health systems. "The first priority is to make the services available and accessible," said Kodindo.

During last month's trip to a refugee camp along the Chadian and Sudanese borders Dr. Kodindo spoke with men and women who were asking her for family planning assistance. "We have to respect their rights and provide them with family planning services and let them decide on which type of contraception they want; then we will be more able to respond to their needs," she concluded. 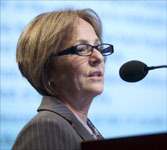 During a conflict, health systems are destroyed and logistical supply chains are often damaged, creating both immediate and long-term problems. While there are standards and polices for responding to refugees' reproductive health needs, such as Reproductive Health in Humanitarian Settings: An Inter-agency Field Manual and Health Cluster Guide, the implementation of these action plans often faces huge bottlenecks, said Krause, the director of the Women's Refugee Committee's Reproductive Health Program.

In a study conducted by the RAISE Initiative, only 15 percent of UN agency, private donor, and government policies referred to comprehensive reproductive health in emergency settings. One percent addressed family planning, and only one policy mentioned emergency obstetric care. "This approach is fragmented and does not complement the holistic comprehensive approach of ICPD that is important for us to achieve the Millennium Development Goals," said Krause.

"Policies and funding should support existing guidelines and standards," said Krause. The recommendations offered in the guidelines "should be fully integrated into any broader health proposals such as Obama's Global Health Initiative," she said. By integrating services and working across sectors, funding for reproductive health services in fragile states can fill the transition gap from relief to long-term development.

Local and national authorities, including NGOs, are integral to the rebuilding process and are best positioned to respond to an emergency. Krause called for increased funding for community-based approaches and to "support capacity building of local NGOs through network approaches and collaborative partnerships."