Fighting Corruption and Impunity in Guatemala

Join us for a conversation with Guatemala's Attorney General, The Honorable Thelma Aldana, as she reflects on the ongoing fight against corruption and impunity in Guatemala, as well as her role in the La Línea corruption case.

(Guatemala City by Fernando Reyes Palencia is licensed under Creative Commons BY 2.0)

Last September, Guatemalan President Otto Pérez Molina was forced to resign following allegations of his involvement in a multi-million dollar corruption scandal known as La Línea. Following months of public protests against corruption and impunity, the Guatemalan Congress stripped Pérez Molina of his immunity and he, along with the former Vice President, is currently in jail awaiting trial.

Guatemalan Attorney General (Fiscal General) Thelma Aldana, with the backing of the U.N. International Commission against Impunity in Guatemala (CICIG), led the investigation into La Línea, which has rocked Guatemala and reverberated throughout the region. Join us for a conversation with Attorney General Aldana as she reflects on the ongoing fight against corruption and impunity in Guatemala, as well as her role in the Línea case.

We are pleased to join with the Fundación para el Desarrollo de Guatemala (FUNDESA) in sponsoring this event.

This event will be conducted in Spanish with simultaneous interpretation

Deputy Assistant Secretary of State for Central America and the Caribbean 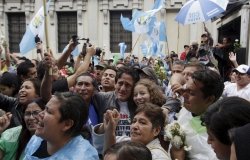