Freedom of Expression in Times of Political Polarization in Brazil

On June 26th, Carlos Lauria, director of CPJ will share the findings of the "Halftime for the Brazilian Press" report with commentary from Brazil Institute Director, Paulo Sotero.

With presidential elections scheduled for October, the Brazilian society and its government are wary that violence against journalists, attacks on the press and acts of censorship have eroded human rights. Political polarization is on the rise and the environment is one of popular discontent with the country's direction. Since June 2013, Brazil has been the scene of sporadic but huge anti-government demonstrations that have brought millions to the streets to protest an array of grievances, from fare increases for public transport to corruption and the use of public funds to host the 2014 soccer World Cup. The protests sometimes turned violent; a cameraman was killed in February 2014. Throughout the demonstrations, dozens of journalists have been detained, harassed, and attacked by law enforcement as well as protesters irked by some media treatment of the demonstrations. These events and scrutiny from media industry groups and press freedom advocates, both domestic and international, have prompted President Dilma Rousseff's administration to take action, primarily by forming a working group in late 2012 to investigate attacks on the press and issue recommendations to the federal government.

Earlier this year, the New York-based Committee to Protect Journalists (CPJ) joined the discussion by offering a comprehensive report on the situation, titled, “Halftime for the Brazilian Press.”  The report, which aims at discussing violence against the press, reflects views of several civil society organizations, presidential advisors, and the communications and justice ministries.  In May, representatives of CPJ presented and discussed the report with President Dilma Rousseff, members of her cabinet and leaders of the Brazilian Congress. On June 26th, Carlos Lauria, director of CPJ, will report on the discussion he had with President Rousseff and other Brazilian authorities, reflecting on Brazil’s challenging press freedom record as well as events that have continued to test the attitudes of both the government and its opposition, including those related to internet governance. Patricia Toledo de Campos Mello, editor-at-large and correspondent at Folha de S. Paulo, will also remark on the turbulent history of journalism in Brazil. 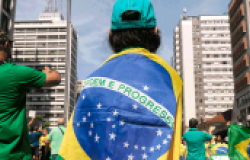