Skip to main content
Support
Show
Live Now
Postponed in Observation of Juneteenth | Disease-Related Stigmas, Their Origins, Their Persistence, and Have We Learned Anything to Stop Them? A Comparative Look at HIV/AIDS and COVID-19
Explore More
Close
External link
Science and Technology
U.S.-Russia Ransomware Cooperation Is Open Question After Summit
Image Credit
Share on FacebookShare on TwitterShare via Email
Share
Live Now
Event

Over the past 70 years, the relationship between Egypt and Russia has been shaped by shared interests and feelings of solidarity, as well as by perceived abandonment and mutual suspicion. How does the past affect today's ties, in light of Russia's growing role in the region? Do Egypt and Russia’s objectives in the Middle East dovetail or diverge and does the relationship have a broader regional effect? On October 28, Egyptian author Tarek Osman will join us for a conversation on the state of Egypt-Russia relations and their future trajectory.

Tarek Osman
"I think the first point of real interaction in modern history has been in the mid- to late 19th century and I think it is interesting to go that way back because the mutual player between Egypt and Imperial Russia at the time was the Ottoman Empire, which obviously has resonances today in Turkey. At the time, both countries were more or less enemies of the Ottoman Empire. And to cut a very long story short, there were two very interesting dynamics in the Egyptian mind regarding Russia. One is Russia is more or less, at the time, weakening Turkey or the Ottoman Empire in its eastern expansion, which was very helpful to the budding Egyptian empire of the 19th century to more or less expand northwards and effectively take control of the eastern Mediterranean, also resonances of today where this eastern Mediterranean is a very important dynamic between Egypt in Russia today. The problem at the time was that Russia presented itself in the Eastern Mediterranean,  in the Middle East, as some sort of protector of the Christian and specifically Orthodox minority in the Middle East at the time and though the Egyptian nascent empire was not really secular, still it was a bit of a problem for a country that has Al-Azhar, the seat of learning of Sunni Islam, to more of less have that kind of foreign project coming to the Middle East. The big other moment or milestone came in 1956, the very famous Suez War, as we call it in the Middle East, the Suez Crisis, as it is known in the West. Two things happened: Egypt proved itself as revolutionary Egypt under Gamal Abdel Nasser or President Nasser of Arab nationalism proved himself or Egypt as a very important enemy, certainly an opponent of what was referred to at the time as Western imperialism in the Middle East, which many people would say, especially the Suez crisis, was the biggest blow to the sunset of the British Empire."

"What issues are there today? The first one is the future of the Eastern Mediterranean and particularly of Syria. Some people say, well, the war in Syria ended, the Assad regime won, it has now entrenched its place, it has secured its authority over quite a substantial part of Syria, all of that is absolutely correct, but I always say to people who invoke that argument, that that all happened through partnerships with allies, primarily Russia, that guaranteed the success of the Assad regime, but bear in mind that the investments that Russia has done now in the eastern Mediterranean, particularly in Syria, are dramatic, which means that Russia is there to stay for a long time, certainly for the foreseeable future, and that Syria is strategically important for the Arab world and particularly for Egypt for many reasons. So my point is the future of the eastern Mediterranean, particularly Syria, is an important dossier between the two countries today."

"Leaving aside interests and disagreements or meetings and diversions of interest in different parts of the Middle East, certainly there is a meeting of mind between the two administrations regarding the nature of the state, the nature of the political structure, and keep in mind that many people in the Middle East, especially and including in Egypt, see the Russian experience during 1990s in which the state seemed, at least for people, at least in the Arab world, seemed that the Russian state is being diluted, is being decentralized, is being weakened, and somehow, the success, if you like, as many people in the Middle East see it, of the Putin regime over the past 20 years of building up the centralization of the state, asserting its authority, re-establishing some sort of a sphere of influence, and standing up against potential, imagined, whatever you want to say, enemies, all of that was seen as very interesting case study to look at and to delve into, especially given what happened in the Arab world over the past 10 years" 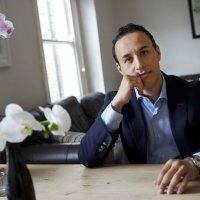