Miscommunication, misinterpretation, and misinformation have abounded in the last weeks as Ukraine's crisis has careened from violence in the capital and mass protests throughout the country, perilously close to the brink of war in Crimea. Now more than ever, a clear picture of what is going on in Crimea, Ukraine and the region is vitally important. Join us by phone to discuss the situation with key experts.

Monday
11:00am – 12:00pm ET
Get Directions
This event will be made into an audio recording
Stream will begin in approximately —:—:—

Summary of the Conversation

As the crisis in Crimea continues to escalate, experts are asking themselves whether we are seeing a reemergence of the Cold War. The UN Security Council, with the exception of Russia, recently condemned the Crimean referendum – which reportedly passed with 97% of the vote – to secede from Ukraine. Further, Russian soldiers continue to occupy Crimea and are amassing soldiers along the Ukrainian border, poised to move into other Russian leaning towns.

Speaking from Kyiv, after recently returning from Crimea, Chris Miller says that on the ground, “it feels like a war is brewing… the Ukrainian Government is mobilizing its troops.” U.S. sanctions imposed against Russian and Crimean officials are interpreted by many in Ukraine as “too soft” and failing to target policymakers in Putin’s inner circle. In Crimea, ethnic Ukrainians and Tatars are fearful and fleeing to Western Ukraine while the ethnic Russian majority supports Russian integration, believing that it will provide a more stable life, better wages, and greater opportunities. This has led to the real fear that Russia will further invade Ukrainian territory and occupy additional Russian leaning areas – something many believe would demand a military response from Ukraine.

In Russia, Sergey Utkin reports a return of Soviet-era mentality among Russia’s senior policymakers. These Russian conservatives, whom Mr. Utkin referred to as “new imperialists,” pose a threat both to Europe and the world as they push to gain global power through force. The current success Russian forces have had in Crimea, where the majority of people have welcomed Russian annexation, have only bolstered the Kremlin’s confidence in its policies and could set the stage for similar actions in other former Soviet republics. Mr. Utkin believes that sanctions will do little to impact Russian policy. This crisis is the product of Russian unilateralism, a rejection of Western influence, and the reemergence of Cold War self-reliance.

Ambassador Oleksandr Chalyi has not lost all hope for a diplomatic solution. However, should Russia decide to annex the Crimean territory, it would, in his mind, signal a “point of no return” and move Ukraine towards “war preparation with Russia.” The repercussions of this regional conflict would have a global impact and reinstate Cold War economic and armed tensions around the world. Therefore, it is vital in Amb. Chalyi’s opinion that the U.S. and Russia come together in Brussels and work under the guidance of the UN to immediately work towards a diplomatic solution. World powers are now faced with two opportunities: “conclude formal peace, which puts an end to the Cold War” or further escalate tensions and enter a prolonged global conflict.

It is clear to all observers on the ground, both in Ukraine and Russia, tensions are reaching a tipping point. If world leaders do not act immediately, then they risk the creation of a regional war between Ukraine and Russia, European instability, and the reemergence of Cold War tensions globally. Leaders must act now or brace for years of conflict. 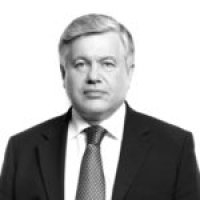