What does success look like? As Russia’s unprovoked war in Ukraine enters into its fifth month, it is clear that the military campaign will not end any time soon and that the potential terms of a successful resolution to the conflict are murky. Neither side appears willing, or indeed able, to agree to terms less than victory.

While over half of the world measured by GDP have denounced Russia and/or support Ukraine in this conflict, over half of the world by population have not denounced Russia and take no side in the conflict, other than a desire to see it end. Only four countries – Belarus, North Korea, Eritrea, and Syria – voted in support of Russia in the UN General Assembly at the onset of the war.

Now the consequences of war are felt beyond the battlefield, as energy prices soar worldwide and the Russian blockade of Ukrainian grain and fertilizer shipments threatens global food security. In the coming months, millions of additional refugees from Ukraine and other parts of the world are expected to emerge, fleeing conflict as well as economic and food insecurity. Those who succeed in reaching Europe and the United States will put additional stresses on those societies, potentially threatening political and social stability.

Former U.S. Special Representative to Ukraine, Ambassador Kurt Volker joined Wilson Center CEO and Director Ambassador Mark Green in a conversation to review these threats, consider what the West might define as a successful resolution to the conflict, and discuss policy options available to the United States in the coming months.

“NATO’s number one job, why there is a NATO, is the collective defense of its members, defense and deterrence, and here you have to give them an A+. There has been no attack on a NATO member, no threat to a NATO member… So on its number one job you have to say NATO’s done a very good job. Number two job of NATO is crisis management, and here you have to give them a failing grade because this is the biggest war in Europe since World War II—more displaced people, more people killed—and NATO is not doing anything. NATO countries individually—United States by a factor of 10, UK, Poland—they are doing things to help a lot, but NATO is not even doing a simple clearing house function of taking Ukrainian requests and farming them out to allies and partners… I think NATO has not distinguished itself as being relevant and effective in crisis management during the biggest war in Europe.”

“[The US] would never have launched into this kind of support for Ukraine and the military role that we’re playing without Russia’s invasion and war crimes. But now that we’re in it, it's an opportunity to complete the job of securing Europe that we didn’t do after the end of the Cold War.”

“The key thing… [is that] Ukraine survives as a sovereign, independent, European democracy. This is critically important… Ukraine is now seen as part of the European family. They’re being offered candidate status to join the EU this week… they have established their identity as a state, as a European state, everyone feels themselves to be Ukrainians and proud to be Ukrainians—so Ukraine is not going away. That is the first failure for Putin and the first success for Ukraine. From that, everything else follows. Ukraine will rebuild, Ukraine will become a successful democracy and economy. Russia will be an aggressor under sanctions, a pariah state, until they change or until they withdraw. And the EU will be strengthened by Ukrainians membership.” 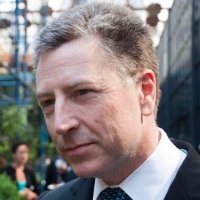