Insights from a National Dialogue on Climate Change, Energy, and Security

Since 2006, the Military Advisory Board has investigated the connections between national security and U.S. climate and energy policies in several high-impact reports, concluding that they represent a linked national security risk. Several members of the board recently shared their experience speaking to business councils, veterans’ groups, and town hall meetings around the nation in an attempt to build bipartisan consensus.

In the midst of a minefield on day two of Desert Storm Task Force Ripper, Marine Corps Operations Officer Richard Zilmer stepped out of his armored personnel carrier, squinted up at the sky, and saw nothing but black from horizon to horizon. Iraqi forces, trying desperately to blunt the attack of coalition armies, had set fire to hundreds of Kuwaiti oil wells and oil-filled trenches.

“The sun was a little white ball about the size of a ping-pong ball that you could look up at directly,” Zilmer, now a retired lieutenant general, said at the Wilson Center on October 21. “This was surreal to about the third power…truly for me a moment that I’ll never forget.”

He wondered, does anyone know we’re here? Or know why we’re here? The puzzle pieces linking energy and national security started to shift into place.

Zilmer is one of more than two dozen retired generals and admirals who have served on the Military Advisory Board for CNA, a research organization based in Washington, DC. Since 2006, the Military Advisory Board has investigated the connections between national security and U.S. climate and energy policies in several high-impact reports, concluding that they represent a linked national security risk.

The Military Advisory Board drew on not only their own experience but also experts in the climate community, insurance industry, and energy sector. “We got to ask the hard questions of a wide variety of people,” said retired U.S. Air Force General Ronald Keys, “and we were convinced.”

Fast forward eight years, however, and little has changed. The Military Advisory Board expressed dismay last summer at the lack of political action to address climate change. In response to this gridlock, many members have spoken to business councils, veterans’ groups, and town hall meetings around the nation in an attempt to build bipartisan consensus on climate change and energy security at the state and local level.

The Cost in Treasure, Talent, and Time

Many components of the U.S. military are actively working to reduce the amount fuel they use. The Navy is deploying new energy technologies in an experimental “Great Green Fleet.” In aviation, Keys said the Air Force is taking a cue from commercial airlines by not fully refueling every flight, since every extra gallon adds weight, among other initiatives.

In 2006, Zilmer made headlines when as commanding general of coalition forces in Al Anbar Province, Iraq, he issued an urgent “priority one” request for alternative energy technologies. “By reducing the need for Class III (petroleum) at our outlying bases,” he wrote, “we can decrease the frequency of logistics convoys on the road, thereby reducing the danger to our Marines, Soldiers, Sailors, and Airmen.” This was the first time a frontline commander had issued such a request.

The nature of the fighting had shifted toward more improvised explosive attacks, and fuel convoys were easy targets. Some 80 percent of the tonnage carried by convoys in Iraq was fuel and water, Zilmer said. While it is estimated that a single gallon of fuel per day was needed to move, equip, and protect the average American soldier in World War II, it took 22 gallons of fuel per day during the Iraq War. Diesel fuel is used at bases, large and small, to operate vehicles and equipment, refrigerate food, air condition living areas, and pump water.

According to some estimates, 1,000 servicemen and women have died during attacks on fuel and water convoys in Iraq and Afghanistan, Zilmer said. “The good news is, we’ve got this great force; the bad news is that it operates at a very, very expensive cost.”

Fluctuating energy costs also destabilize the budget. The Department of Defense is responsible for about two percent of the fuel used in the United States every year, said Zilmer. Every $5 increase in the price of gasoline costs the military about $1 billion, said Keys. Last year, the Pentagon spent about $14 billion on energy. This year, as oil prices have declined, the number should be much less.

Climate change is creating new challenges in terms of physical infrastructure as well. There are at least 30 coastal military bases that may need to be hardened to withstand more violent storms and higher sea levels, or even moved entirely, said Keys. At the world’s largest naval station in Norfolk, Virginia, the challenge is twofold: sea levels are rising, and the land is subsiding.

The problem is not only adapting to changing conditions, but doing so while maintaining current capabilities. “When you’re down in New Orleans, floating on a screen door and you want to be rescued by my search and rescue guys,” Keys said, “you don’t want to hear me saying, ‘You know, I’d love to come down there, but I’m up to my ass in water myself.’”

Military leaders have warned that climate change could result in more deployments, from providing disaster relief and assisting displaced people, to the increased potential for instability and conflict from resource scarcity. “The next crisis is around the corner,” said Zilmer. “The nexus of water, energy, food, population in the next 20 or 30 years is catastrophic.”

This is a perspective some may appreciate more coming from people with “scar tissue,” said Zilmer. “It’s not necessarily only from an environmental perspective, or only from an economic perspective; we talk about the cost in treasure, talent, and time that it takes to provide the security that we enjoy as a nation.”

“Lest I sound like a greenie and a zealot, I’m not”

While there’s widespread agreement that energy is important to national security, said Phyllis Cuttino, director of Clean Energy Initiatives at Pew, which regularly polls Americans on these issues, “people are not used to thinking about climate change in this way.”

Hearing from Keys, Zilmer, and other military leaders, alongside scientists and local policymakers, can change people’s minds, said Cuttino. “I really think that outreach had an impact.”

There was the retired Air Force colonel who said he’d never thought about climate change and national security but now plans to write to his representatives about what they’re doing about it, Cuttino recounted. “I just believe those guys,” he told Cuttino. Then CNA started to hear from politicians reaching out proactively to ask the Military Advisory Board to come to their states.

In Michigan, Mark Pischea, a partner at the political consulting firm The Sterling Corporation, helped arrange 37 talk radio interviews and five board meetings for Military Advisory Board members. He credits their engagement and debate for “being able to move the dial on the ground.” Vice Admiral Lee Gunn, U.S. Navy (retired), spoke to the editorial board of the conservative-leaning Detroit News, which later published an op-ed urging conservatives to put forward plans for addressing climate change and energy. And in September, Michigan Governor Rick Snyder became one of the first Republican governors to announce a plan to reach carbon emissions reduction targets under the EPA Clean Power Plan.

What’s Next? Pulling in the Same Direction

Climate change is a “ring road issue,” said Andrew Holland of the American Security Project. “It touches on everything and is impacted by everything…but on the other hand, that gives everybody a job to do.”

In their travel around the country, the Military Advisory Board found people are ready to act, but are awaiting guidance. Officials in North Carolina, Iowa, and Minnesota, for example, wanted federal agricultural guidelines to help them adapt to climate change, said Sarah Vogler, a senior research specialist at CNA. Without it, they’re moving forward on their own.

Cuttino and Pischea both cautioned that Americans don’t like to hear about a problem without a solution. “People want to know what they can do…and if you don’t have policy, it’s very difficult to tell them what they can do,” Cuttino said. “If there’s one thing that advocates really need to work on in Washington, it’s crafting that policy.” She pointed out that the last time Congress passed an energy bill was in 2007, before the natural gas boom and many other changes to the energy market.

“There is great interest out there,” said Zilmer. “It’s being mostly driven, I would say, by economics, but what appears to be absent at this point, is this collective strategy that can bring together 50 different states all pulling in the same direction.”

“Lest I sound like a greenie and a zealot, I’m not. This is about being faster, lighter on the battlefields of tomorrow, and being more lethal. That’s what this is about and that’s why it’s a national security issue,” said Zilmer.

Whether or not Americans continue to see climate change through a politically polarized lens has global implications, said David O’Sullivan, the European Union’s ambassador to the United States. “Climate change is not just about tomorrow or future generations, it is unfortunately happening now and it is happening fast. Its impacts are real, far reaching, and indiscriminate; and all nations and communities around the world are going to be exposed to it and are being exposed to it.”

“The United States and European Union have to show joint leadership,” O’Sullivan said. “We must act now in order to limit future risks to the planet we share and to the peace we seek.”

Photo Credit: The remains of a fuel convoy attacked in Afghanistan, courtesy of Jeff Hall/U.S. Army.

Ambassador of the European Union to the United States 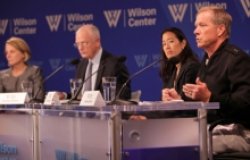 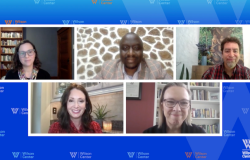 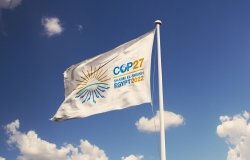 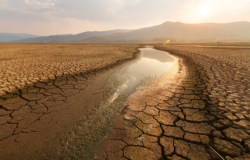 The Hill
Climate
At COP27, Empower Emerging Nations to Lead the Climate Fight