Skip to main content
Support
Explore More
Close
Blog post
Democracy
Tensions Rise in DR Congo with Credibility of Next Elections at Stake
By Ida Sawyer on October 22, 2021
Share on FacebookShare on TwitterShare via Email
Share
Watch Now
Part of the Resources for Peace
Event

Institutions that manage river basins must assess their ability to deal with variable water supplies now, said Professor Aaron Wolf of Oregon State University at the July 28 ECSP event, “International River Basins: Mapping Institutional Resilience to Change.” “A lot of the world currently can’t deal with the variability that they have today, and we see climate change as an exacerbation to an already bad situation.”

Wolf and his colleagues, Jim Duncan of the World Bank and Matt Zentner of the U.S. Department of Defense, discussed their efforts to map basins at risk for future tensions over water, as identified in their coauthored World Bank report, “Mapping the Resilience of International River Basins to Future Climate Change-Induced Water Variability.”

Floating Past the Rhetoric of “Water Wars” 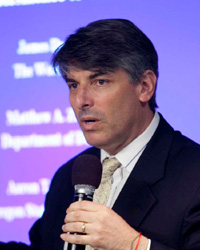 Currently, there are 276 transnational water basins that cross the boundaries of two or more countries, said Wolf. “Forty percent of the world’s population lives within these waters, and interestingly, 80 percent of the world’s fresh water originates in basins that go through more than one country,” he said. Some of these boundaries are not particularly friendly – those along the Jordan and Indus Rivers, for example – but “to manage the water efficiently, we need to do it cooperatively,” he said.

Wolf and his colleagues found that most of the rhetoric about “water wars” was merely anecdotal, so they systematically documented how countries sharing river basins actually interact in their Basins at Risk project. The findings were surprising and counterintuitive: “Regularly we see that at any scale, two-thirds of the time we do anything over water, it is cooperative,” and actual violent conflict is extremely rare, said Wolf.

Additionally, the regions where they expected to see the most conflict – such as arid areas – were surprisingly the most cooperative. “Aridity leads to institutions to help manage aridity,” Wolf said. “You don’t need cooperation in a humid climate.”

Expanding the Database for Risk Assessment

Oregon State University’s Transboundary Freshwater Dispute Database (TFDD) tracks tabular and spatial information on more than 680 freshwater treaties along 276 transboundary river basins, said Jim Duncan. The team expanded the database to include recent findings on variability, as well as the impacts of climate change on the future variability of those basins. “We have a lot more information that we are able to work with now,” Duncan said.

Analyzing the institutional vulnerability of treaties along with hydrological hazards, they found the risk of tension concentrated in African basins: The Niger, Congo, and Lake Chad basins “popped out,” said Duncan. When predicting future challenges, they found that basins in other areas, such as Southeastern Asia and Central Europe, would also be at risk.

Duncan and his colleagues were able to identify very nuanced deficiencies in institutional resilience. “Over half of the treaties that have ever been signed deal with variability only in terms of flood control, and we’re only seeing about 15 percent that deal with dry season control,” said Duncan. “It’s not the actual variability, but the magnitude of departure from what they’re experiencing now that is going to be really critical.” 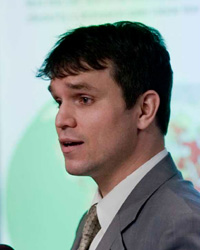 “Generally speaking, it’s not really the water so much that people are willing to fight over, but it’s the issues associated with water that cause people to have disagreements,” said Matt Zentner. Water issues are not high on the national security agendas of most governments; they only link water to national security when it actively affects other sectors of society, such as economic growth, food availability, and electric power, he said. Agricultural production – the world’s largest consumer of water – will be a major concern for governments in the future, he said, especially in developing countries economically dependent on farming.

Some experts think that current international treaties are not enough, said Zentner. Peter Gleick of the Pacific Institute has said that “the existing agreements and international principles for sharing water will not adequately handle the strain of future pressures, particularly those caused by climate change.”

How transboundary water treaties fare as the climate and consumption rates change is not as simple as measuring flow; the strength of governing institutions, the parties involved, and other variables all play major roles as well, said Zentner. “When you have flexibility built within [a treaty], it allows it to be a living, breathing, and important part of solving those [water] problems.”