Jordan and the United States: A Conversation with Jordan’s Deputy Prime Minister and Minister of Foreign Affairs H.E. Ayman Safadi

On Friday, September 16, the Middle East Program hosted Jordan’s Deputy Prime Minister and Minister of Foreign Affairs His Excellency Ayman Safadi in conversation with The Wilson Center’s President & CEO Ambassador Mark Green.  The Hashemite Kingdom of Jordan is a key partner and strategic ally to the United States in one of the most volatile regions of the world. It continues to play an integral and leading role in maintaining peace and stability in the region particularly on the Palestinian-Israeli front, the fight against violent extremism, and in hosting millions of refugees from neighboring countries across time. At the same time, the resource scarce country grapples with its own socioeconomic challenges, especially in light of the COVID-19 pandemic and skyrocketing unemployment amongst its educated youth and women.

Prior to the event, His Excellency Foreign Minister Ayman Safadi signed a seven-year memorandum of understanding at the U.S. Department of State that commits $1.45 billion to Jordan annually. He noted the agreement will play an important role in mitigating the impact of global crises on the Kingdom of Jordan, such as hosting over 1 million refugees, border security, and increasingly limited water resources, in addition to accelerating the country’s development process. “This is an extremely important MOU [and] speaks to the strong friendship that the two countries have. This is the longest and largest MOU that we signed,” he commented.

The United States and Jordan have enjoyed diplomatic relations for more than 70 years, during which the latter has served as a key partner in one of the world’s most turbulent regions. For this reason, Minister Safadi argued maintaining a strong partnership is of strategic interest to the US and its allies. “We’ve done a lot of good for our countries and the region: work together to fight terrorism, promote a culture of peace and moderation, [and promote] efforts to stabilize a region that is key to US interests.” However, the geopolitical and socioeconomic landscapes have changed significantly in the last several decades, and Jordan, he stated, “has been at the receiving end of every crisis in the region. Not just in terms of suffering consequences but also address them in terms that are conducive of human dignity.”

Notably, the refugee crises stemming from conflicts in Syria, Iraq, and Yemen have placed enormous strain on Jordan’s resources. Despite this, the Kingdom aims to provide a dignified life to its refugee communities and myriad opportunities to integrate economically and socially. “They are victims of conflict. We cannot victimize them again by abandoning them,” Minister Safadi put forth. However, the international appetite for supporting refugees and their host countries is on the decline. He argued, “If our refugees have a shot at a dignified life in our region, they will not migrate,” suggesting it is in the West’s interest to keep attention on their needs despite the tendency to divert resources to the next crisis.

Minister Safadi detailed the extensive economic and political reforms underway domestically, as well. Importantly, measures that will improve the business climate, including “legislation that would make investment more attractive” and “a more efficient and active bureaucracy that can facilitate opportunity.” The reforms will ideally increase economic activity in Jordan and expand private sector employment, because “the public sector can no longer provide jobs.”

The startup scene is a bright-spot in Jordan’s economic outlook, and an increasingly more attractive career route among youth. “We are lucky to have a skilled and educated population that have been at the forefront of innovations… we want to maximize our strength,” Minister Safadi said. 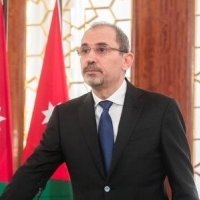