Leading for Change: Women in Iran and the Journey to Freedom

Afkhami launched her journey in activism more than four decades ago. Prior to the 1979 Iranian Revolution, she played a key role in the passage of the progressive 1975 Family Protection Law as Iran’s Minister for Women’s Affairs, founded the Association of Iranian University Women, and served as Secretary General of the Women’s Organization of Iran. Afkhami has gone on to co-found and head several organizations advocating for women’s rights, and received a number of awards for her pioneering work.

In conversation with MEP Director Merissa Khurma, Afkhami will address the situation in Iran through her own experience as a women rights activist, the most imminent challenges facing women today, and ways the international community can band together to support women and girls globally, but particularly in Iran where young girls and women are leading protests and calls for change. 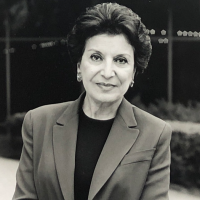