Madagascar, Past and Future: Lessons From Population, Health, and Environment Programs

Lisa Gaylord, director of program development at the Wildlife Conservation Society; Matthew Erdman, program coordinator for the Population-Health-Environment Program at Blue Ventures Conservation; and Kristen Patterson, senior program officer at The Nature Conservancy, discussed the challenges and outcomes of past and future integrated population, health, and environment (PHE) programs in Madagascar.

In Madagascar, "today's challenges are even greater than those faced 25 years ago," said Lisa Gaylord, director of program development at the Wildlife Conservation Society. Gaylord and her co-panelists, Matthew Erdman, the program coordinator for the Population-Health-Environment Program at Blue Ventures Conservation, and Kristen Patterson, a senior program officer at The Nature Conservancy, discussed the challenges and outcomes of past and future integrated population, health, and environment (PHE) programs in Madagascar.

Gaylord, who has worked in Madagascar for nearly 30 years, gave a brief history of USAID's activities on the unique island, which she called a "mini-continent." She used the "nature, health, wealth, and power" framework to review the organization's environment, health, and livelihoods programs in Madagascar and their results. Governance, she said, is the centerpiece of this framework, but this piece "maybe didn't have an adequate foundation" in Madagascar to see the programs through the political crisis. 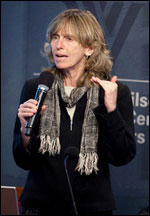 Though its programs started at the community level, Gaylord said USAID's objective was to scale up to larger levels. "You can't always work on that level and have an impact," she said, and there was "tremendous hope" in 2002 for such scaling up when Madagascar elected a new president, Marc Ravalomanana.

Unfortunately, changes in funding, a lack of economic infrastructure, and poor governance forced development programs to scale down. After President Ravalomanana was overthrown in a military coup in 2009, the situation got worse – the United States and other donors pulled most funding, and only humanitarian programs were allowed to continue.

"What worries me is that I think we have gone back" to working on a village level, Gaylord said. "We want to go up in scale, and I think that we felt that we could in Madagascar, but that's where you have the political complexities that didn't allow us to continue in that direction."

Going forward, Gaylord said that it is important to maintain a field-level foundation, take the time to build good governance, and maintain a balance in the funding levels so that no one area, such as health, dominates development activities.

Living With the Sea

Based in southwestern Madagascar, the Blue Ventures program began as an ecotourism outfit, said Erdman, but has since grown to incorporate marine conservation, family planning, and alternative livelihoods. One of its major accomplishments was the establishment of the largest locally managed marine protection area in the Indian Ocean, called Velondriake, which in Malagasy means "to live with the sea." This marine area covers 80 kilometers of coastline, incorporates 25 villages, and includes more than 10,000 people. The marine reserves for fish, turtles, and octopus, as well as a permanent mangrove reserve, protect stocks from overfishing. 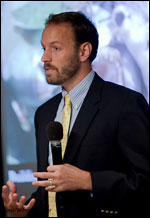 One of the biggest challenges facing the region is its rapidly growing population, which threatens the residents' health and their food security, as well as the natural resources on which they depend. More than half the population is under the age of 15 and the infant and maternal mortality rates are very high, Erdman explained. Blue Ventures, therefore, set up a family planning program called Safidy, which means "choice" in Malagasy.

"If you have good health, and family size is based on quality, families can be smaller and [there will be] less demand for natural resources, leading to a healthier environment," said Erdman.

The region's isolation and lack of education and health services are a challenge, said Erdman, but over the past three years, the contraceptive prevalence rate has increased dramatically, as has the number of clinic visits. The program uses a combination of clinics, peer educators, theater presentations, and sporting events, such as soccer tournaments, to spread information about health and family planning.

"There is a long history of collaborative work in Madagascar," Patterson said. Focusing on the commune (county) level, she worked in conjunction with USAID, Malagasy NGOs, and government ministries to try to scale up PHE programs in Madagascar's Fianarantsoa province, which has a target population of 250,000 people. 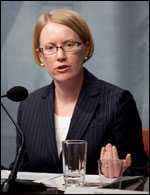 "We essentially worked at two different levels," said Patterson. At the regional level, a coordinating body for USAID and local partners called the "Eco-Regional Alliance" met monthly. The "Champion Commune" initiative, which worked at local levels, had three main goals, she explained:
• Create a strong overlap with neighboring communes;
• Promote activities that benefited more than one sector (such as reforesting with vitamin-rich papaya trees); and
• Capitalize on the prior experiences of Malagasy NGOs in implementing integrated projects to help build up civil society.

Though working in such remote areas is expensive, and all non-humanitarian U.S. foreign aid has been suspended since the coup, Patterson hopes that development programs will return to Madagascar. Pointing to its vast rural areas, she stressed the importance of integrated efforts: "The very nature of multi-sectoral programs is that they have the highest benefit in the areas that are most remote. These are the areas where people are literally left out in the cold."