Military Reform in the Democratic Republic of Congo

Military Reform in the Democratic Republic of Congo

The security sector in the Democratic Republic of Congo (DRC) is in dire need of reform.  Steve McDonald, director of the Wilson Center’s Africa Program and the Project on Leadership and Building State Capacity, spoke of his organization’s work in the Congo and the precipice on which the country stands, stating that “The Wilson Center has long been involved in the eastern Congo, working with the community, government and military leaders to create a platform for reconciliation and to form a cohesive leadership to confront problems of insecurity and lack of governance.”  Citing the Wilson Center’s partnership with the State Department to implement a security sector reform program in DRC, McDonald emphasized  improving a Congolese security structure plagued by mistrust and hierarchical confrontation was integral to progress in governance, peace stabilization, and development.  He asked, “Is the infamous corruption that permeates the armed forces too big to overcome?  If reform is to happen, by whom, and at what levels?”

Hope for Progress in the Face of Past Failures

Ben Affleck, a founding member of the Eastern Congo Initiative (ECI), unable to attend in-person, prepared a message that touched on his involvement in eastern Congo, his relationship with the late Howard Wolpe, and the urgent necessity for security sector reform.  For these efforts to succeed, Affleck commented that the Congolese government must “renew its political commitment to improving the security sector,” and “…remove from office those individuals obstructing military reform.”  His recommendations included cooperation with the United States Government, international donors and the Kabila administration to streamline national and international reform efforts, as well as the development of clear benchmarks to track progress.  Affleck was hopeful that renewed commitments to strengthen political will, alongside the determination of the Congolese people and the conviction of international partners, could have a meaningful impact on the security sector.

Cindy McCain, co-founder of the ECI, focused her remarks on DRC’s recent political developments, particularly the 2011 elections, saying that “the 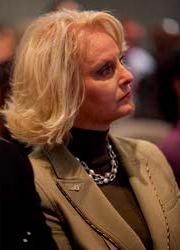 electoral process and the aftermath at the polls further heightened the continued state of insecurity that has been the daily lot of the civilian population.” Providing context for the current strife, she noted the emergence of new militias as a byproduct of the election results, and the fact that the Congo currently ranks last in the United Nations Human Development Index (UNHDI), in turn failing to reach all of its Millennium Development Goals (MDGs).  Despite these circumstances, McCain expressed confidence in the country’s ability to stabilize once effective security reform measures are taken, stating that “[the]Congo will not rebuild its once vibrant public health and economic sectors, and get back on track, so long as it lacks a competent, professional army that is accountable to its people.”

Deputy Assistant Secretary for African Affairs at the United States Department of State, Karl Wycoff, addressed the difficulties associated with integrating militias into the national army, especially in light of its track record of human rights abuse. 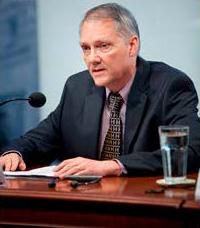 The problem, he contends, is that “despite certain attempts by the (Government of the Democratic Republic of the Congo) GDRC to bring ex-rebel groups into its ranks, certain groups… have only nominally integrated into the force and continue to operate independent from the formal command structure.”   This splintering threatens the government’s ability to consolidate and hold its soldiers accountable.  He posited that “assisting to build the institutional and operational capacity of the military, police, and judicial sectors while simultaneously inculcating them with respect for the human rights of civilian populations is fundamental to the success of the Congo’s stability…”  Wycoff was unequivocal in stressing the United States Government’s support for the DRC’s efforts to emerge from conflict and create a stable country “that is at peace with its neighbors and provides for the basic needs of its citizens.”

ECI Fellow, Mvemba Dizolele, echoed the sentiment of Affleck by saying that the ongoing state of insecurity is the primary cause of the Congo’s woes. 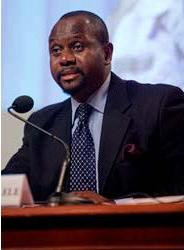 He also addressed Karl Wycoff’s assertions on the dangerous influence of militias.  Dizolele stated plainly that “the lack of an adequate national integration program has resulted in the establishment of parallel commands and structures within the national army.  This means that the militias who join the national army remain in their areas of control, and keep their command nearly intact.  This arrangement allows former militiamen to perpetuate abuses on the civilian populations and keep their access to local resources, all under the protection of the Congolese uniform.”  Nonetheless, Dizolele shared the positive outlook expressed by the other panelists: “The Congolese people want peace and with more political will, sustainable reform is possible.”

An Absence of Political Will

Emmanuel Kabengele of the Network for Security Sector Reform and Justice (RRSSJ) highlighted the government’s lack of political will in tackling security sector reform.  He conceded that although the Congolese army has received tremendous support from the Mission de l’ Organisation des Nations Unies pour la Stabilisation en République Démocratique du Congo (MONUSCO) in recent years, this support has hardly yielded tangible gains for the majority of the Congolese people who continue to subsist on the margins.  Similarly, Kabengele lamented that the Congo’s abundant resources have failed to benefit the population as a whole, asserting that security sector reform could be the solution to all of these problems. He maintained, “It is a largely admitted and a strong conclusion…of the report that security is an economic, geostrategic and development imperative. Without security, we cannot talk about development.”[1] While other factors are undeniably significant, the call was unanimous for earnest and steadfast engagement on the part of Kinshasa to overhaul of the security sector.

Affleck summarized the speakers’ consensus that progress is possible: “Past attempts at military reform have failed mainly due to the lack of political will from the Congolese government and the shortfalls in the international community in encouraging the development of that political will.  Both of these can change.  With a new government taking shape in the DRC, the Congolese government and the international community have a new chance to work together toward real military reform.”