On November 20, 2017, the Wilson Center Africa Program hosted an event titled “Narrowing the Gap between International and Local Actors in Peacebuilding Efforts in South Sudan,” featuringMs. Emmaculate Asige Liaga, current Southern Voices Network for Peacebuilding scholar and doctoral candidate at the University of Pretoria in South Africa; Mr. Mike Jobbins, the Senior Program Manager for Africa at Search for Common Ground; and Ms. Carrie Gruenloh, Senior Conflict and Peacebuilding Advisor, Office of Conflict Management and Mitigation, at the U.S. Agency for International Development. This event assessed the key factors affecting peacebuilding in South Sudan with a focus on recommendations for improving the effectiveness of peacebuilding efforts through supporting local peacebuilding strategies. Key issues addressed included a landscape of current local peacebuilding efforts, an analysis of the shortcomings of current peacebuilding efforts, and ways forward to promoting peace in South Sudan. By identifying the barriers to more efficient peacebuilding, this discussion sought to share lessons learned, best practices, and opportunities for improvement.

Ms. Liaga opened the discussion by outlining the current state of peacebuilding efforts and the conflict in South Sudan. The key problems that Ms. Liaga identified in peacebuilding efforts are a lack of inclusivity, multidimensional strategies, and rigor to meet the intensity of the conflict. She highlighted the multilevel aspects of the conflict, from conflict between local groups to the higher level political conflict. In peacebuilding efforts, the actors consulted do not reflect the multilevel divisions of the conflict – most international actors have identified the government and other high-level political groups as the only actors to consult, often ignoring key aspects of the problem. Further, peacebuilding data shows that, while there are conflict areas spread across South Sudan, international NGOs only focus their work in a small number of targeted areas. The continuation of conflict has left many local and community-based civil society groups struggling to continue their work on the grassroots level, and they have lacked the capacity to self-advocate and become part of higher level negotiations. Top-down approaches to peacebuilding exclude local actors from negotiations and from opportunities for capacity building. This lack of integration between the grassroots efforts in South Sudan and the internationally-funded peacebuilding programs results in gaps in services and understanding, which has contributed to the seeming intractability of the conflict. Ms. Liaga offered recommendations to international governments and organizations, including to form meaningful partnerships with local organizations that reach beyond a “sub-contractor” relationship, target mid-level NGOs to help increase their effectiveness, and coordinate their projects more effectively. She also recommended that the Government of South Sudan should recognize citizen participation in the National Dialogue; that the AU, IGAD, and South Sudanese government should work to provide a favorable environment for NGOs to operate; and that IGAD and the AU should ensure community inclusion in the revitalization process.

Mr. Jobbins offered his perspective on the efforts of international NGOs who are working to solve the gaps that Ms. Liaga identified, as well as his reflections on the current situation in South Sudan. Mr. Jobbins remarked on the sobering reality that, after billions of dollars of official development assistance, the conflict in South Sudan continues, and the political issues are as intractable as ever. The problem lies not only with the level of funding going to South Sudan, but the ways that the funding is used. While 5.5 billion USD of official development assistance went to South Sudan between 2011 and 2015, less than 1 million USD went to supporting local capacity in the peacebuilding space. Looking past the high-level political violence in South Sudan, there has been a diffusion of violence to the community level and a normalization of that violence. Conflict is exacerbated and made more likely due to the lack of interaction between different ethnic and tribal groups, as rumors of violence and retaliation have fertile ground to spread. Mr. Jobbins emphasized that peacebuilding will occur through supporting local capacities and by putting faith in the ability of the South Sudanese people to build peace. He discussed current efforts by Search for Common Ground that emphasize building a constituency of peace among South Sudanese people and seek to strengthen inter-community relationships and trust. He noted that the international community can help with supporting rule of law norms, investing in projects that have proven successful, and pushing for long-term aid that is smarter and more flexible.

Ms. Gruenloh offered insights into USAID’s involvement in and strategies towards the conflict in South Sudan, describing the differences between the flexible and immediate aid projects. Since the 2015 outbreak of violence, there has been more of a focus on balancing the rapid response aid with longer term projects with an eye to the creation of locally-designed projects and support for local institutions. Part of that shift has including making sure all projects are not only context specific but that, in a country where there has been such widespread violence for so long, any projects operating in South Sudan have some measure of conflict sensitivity within their framework. New locally-lead, conflict-sensitive peacebuilding projects will be able to create lasting and widespread change by working within existing structures that operate with local legitimacy, instead of possibly disrupting those structures of local leadership. One primary challenge lies in donor commitment to long-term support and the fact that peacebuilding funding is often siloed, whereas it should be incorporated into all programming. Peacebuilding can be successful when the communities themselves are ready for peace and when higher level leaders show interest in unifying. Her comments emphasized the continuing importance of political will and cooperation in peacebuilding. While grassroots peacebuilding efforts are incredibly important, they need to go along with high-level government agreements to support peace. Ms. Gruenloh’s recommendations focused on the importance of conflict sensitivity, locally-driven peacebuilding, and flexible, better-coordinated approaches. International donors and NGOs need to be nimble enough to be ready for openings and opportunities when they arise and must help build a runway to peacebuilding on the local level. 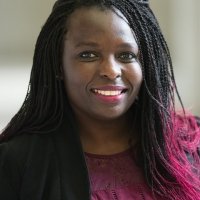