Development and poverty reduction are inextricably linked to the water, energy and security nexus in Africa. There was some consensus that the impact of climate variability and extreme climate events depends not only on the severity of the crisis, but also on the vulnerability of the affected population – which is correlated with the level of development along with governance and other socio-cultural factors. Just as poverty can put communities at an increased level of vulnerability, so can sustainable development lead to improvements in climate-resilience and human security.

The Water, Energy, and Security Nexus in Africa: From Crisis to Cooperation

The Africa Center for Strategic Studies co-hosted a series of events on water, energy and security in Africa from 19-21 August 2014 in partnership with the  Environmental Security Division at AFRICOM, US Army Corps of Engineers, Institute for the Analysis of Global Security, South Africa-based Council for Scientific and Industrial Research and the Woodrow Wilson International Center for Scholars. 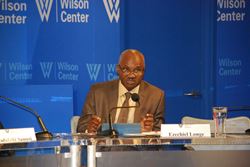 Events included an inter-agency briefing on the findings and recommendations for a May 2014 experts’ workshop in South Africa on 19th August; a public event on “Preempting Environmental and Human Security Crises in Africa: Science-Based Planning for Climate Variability Threats” at the Wilson Center on 20th August; and a brainstorming seminar with a working group of professionals from African universities, think tanks and international organizations at ACSS on 21st August.

Variability and changes in climate are having a significant impact on stability and human security in Africa – from the Lack Chad Basin where loss of livelihoods and subsequent migration has fostered terrorism, to the Congo River where increased pollution and reduced navigability has become detrimental to human security. 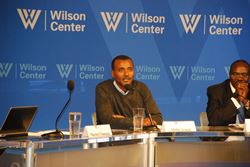 Participants called for a reframing of the discourse on climate change and water security.  Effective framing of these issues will not only increase clarity, but will also focus on the current situation and rate of change rather than a worst case scenario. It was also noted that framing the solution in a trans-disciplinary manner will increase the likelihood of success by including relevant technological as well as institutional aspects.

Development and poverty reduction are inextricably linked to the water, energy and security nexus in Africa.  There was some consensus that the impact of climate variability and extreme climate events depends not only on the severity of the crisis, but also on the vulnerability of the affected population – which is correlated with the level of development along with governance and other socio-cultural factors.  Just as poverty can put communities at an increased level of vulnerability, so can sustainable development lead to improvements in climate-resilience and human security.  Although harnessing Africa’s rivers to increase access to electricity could serve as a catalyst for economic growth and development, it was noted that countries must work to minimize environmental damage and work with other riparian states to ensure equitable outcomes.

Participants stressed the need to incorporate local contexts within larger national and regional narratives by coordinating and leveraging research and action across all levels of society and government.  They also highlighted the need for African countries to glean best practices from  South American or Asian counterparts with similar water and energy challenges.  Additionally, the science-policy interface must be strengthened in order to achieve science-based policy and policy-based science.  By coming together, these groups can share and leverage their work, increasing the effectiveness of efforts to address this complex challenge to African security.

The most recurring theme in these meetings was the call to action.  There was strong consensus on the need to implement effective, sustainable policies within the institutions and mechanisms that are already in place.  One participant in the meetings noted the inclination of politicians to, “focus on the next election, rather than the next generation.” 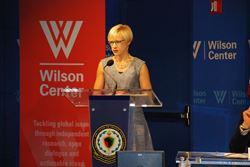 Emphasizing the need for political will and making the point that politicians will only be responsive to issues of water security and climate-related stressors if there is sufficient political pressure.  Participants offered an array of solutions to the problem of implementation, coming back to framing in a politically-relevant manner, educating citizens regarding the grave impacts of climate change and poor resource management as well as further investment in capacity-building and equipping.  They stressed the urgent need to transform crisis into cooperation through collaborative utilization of trans-boundary resources and joint efforts to combat the damaging impact of climate change and variability.

Senior Fellow, Institute for the Analysis of Global Security

Principal Scientist, The Council for Scientific and Industrial Research