On October 16, 2017, the Wilson Center Africa Program hosted a discussion on “Reforming the African Union for Financial Independence, Sustainability and Effectiveness” with Dr. Donald Kaberuka, the African Union High Representative for Financing of the Union and Peace Fund. This discussion centered around the key role that the African Union (AU) and its predecessor, the Organization for African Unity, has played in establishing democratic norms and promoting peace and security on the continent. It also highlighted some challenges to implementation and funding that AU is currently facing and recommendations for increasing the AU’s financial independence, as laid out in the “Report on the Proposed Recommendations for the Institutional Reform of the African Union,” by H.E. Paul Kagame.

Dr. Kaberuka emphasized three main points regarding AU reform. First, it is important to recognize that the AU is an instrument for Africa and for the world. The AU plays a vital role in maintaining peace and security, including countering violent extremism; it is therefore imperative that the AU be a strong organization with the capacity to counter African and global challenges. For example, the AU has been a key actor in Somalia’s recovery process and has managed to accomplish a great deal there despite limited means. Second, the AU is not alone in its need for reform: all international organizations, including the United Nations (UN) and Bretton Woods organizations, must undergo reform in order to adapt to a changing global environment. Lastly, reforms are never easy because they disrupt the status quo, and there will always be those who lag in implementing reforms. While the reform process should be African-led, the international community, including the UN, can help with the coordination and implementation of reforms. The international community has a stake in helping the AU become the most effective organization that it can be. In particular, clarifying the division of labor between the AU and UN in peacekeeping is an important piece of increasing both organizations’ effectiveness.

Dr. Kaberuka noted that one of the major weaknesses of the AU has been the lack of resources. The AU has three budgets: for administration, programs, and peace and security. Today, funding for peace and security has presented the greatest challenge. When the AU was first established in 2001 and launched in 2002, peacekeeping was not among its core missions; therefore, more needs to be done to equip the AU to play a more significant role in peacebuilding, both in terms of increasing resources and capacity. While over a dozen African countries have already contributed to the AU Peace Fund, more can be done in this arena. The AU, as well as finance ministers from AU member countries, are working towards generating a comprehensive plan for funding the AU to decrease dependence on external resources, with the goal of developing and fully implementing a new AU financing plan by 2018. 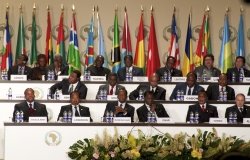 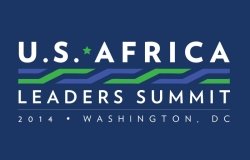 Article
Conflict Resolution and Peacebuilding
What Next for US-Africa Engagement?
August 22, 2014

Publication
Conflict Resolution and Peacebuilding
Conference Report: African Women and Youth as Agents of Change through Technology and Innovation